The South Asian country has long been the world’s biggest exporter of human hair and companies involved in the sector estimate that the business is now worth up to 8.5 billion rupees (nearly $200 million) a year.

Hair is offered as a sacrifice to the hundreds of thousands of gods in the Hindu pantheon for reasons as diverse as wanting to ward off ill-health and misfortune or to bring luck and fortune.

The practice is common in southern India, especially at temples in Tamil Nadu state where people from all over the country come to be shaved.

But those in the hair trade that feeds off the ritual fear for the future, as modern India changes on the back of its recent economic boom, opening up the vast country to more secular, consumerist pursuits and outside influences.

“There has been a change or trend in the reduction of the younger generation going to the temple and tonsuring their hair,” said George Cherian, chief executive of Raj Hair International in the state capital Chennai.

“They might cut their hair length half-way through but not necessarily fully shave their hair,” he told AFP TV. 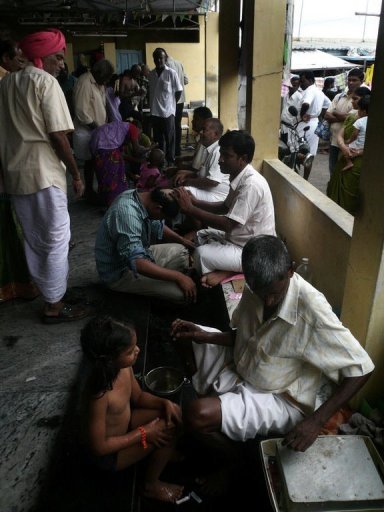 Hindu devotees have their hair cut at the Tiruthani Muragan temple in Tamil Nadu. (Karishma Vyas/AFP-Yonhap News)
For now though, business remains brisk.

On a religious festival day, up to 1,000 people, including 50 to 60 women, undergo the ritual at the Tiruttani temple north of Chennai.

Indian women like Anandi Perumalswamy are the mainstay of the industry, even if their lives are a world away from the fancy salons in the United States and Europe, where demand for hair extensions is highest.

“Our favorite god is Lord Muruga. We had lots of problems, like debt, many types of problems,” said Perumalswamy, a 45-year-old mother-of-two.

“I had prayed for my son to get married. I had promised that if he gets married, then I would offer my hair.”

The marriage took place a few months ago and so she came to Tiruttani to uphold her part of the bargain.

Tonnes of tresses are cut every day and mostly sold at auction to wholesalers, which then prepare and export them for use across the world.

The practice has even become a lucrative sideline for temples, who use the money raised for charitable activities. Some suppliers have also gone into business themselves, cutting out the need for wholesalers.

The vogue for hair extensions among Hollywood actresses like Gwyneth Paltrow and other celebrities has pushed up demand for the beauty product.

Cheaper synthetic hair was popular in the 1990s and caused a slump in business for Indian firms but human hair is now favored, adding to its market value.

Currently one kilogram of Indian hair fetches on average $250: 15 years ago the cost was $20 per kilo, said Cherian.

“Indian hair is the most sought after for the only reason that it belongs to the same Caucasian race to start with,” said Cherian.

“And the natural color black matches the hair color of the Africans as well as, when bleached... the color of the Europeans or the Americans.”

The end product is supplied to women like Fereena West, who goes to the ColourNation salon in central London, where a full head of natural Indian hair can cost more than $3,000 and take up to four hours to put in.

“The hair extensions that I get, they’re quality. They’re 100 percent human hair and they are quite expensive but you have to pay for what you get,” said the 25-year-old part-time model.

At the exclusive Michaeljohn salon, also in London, one client who gave her name only as Natasha said getting extensions was money well spent.

“Hair extensions have become very popular because celebrities like (the singer and television presenter) Cheryl Cole have them and it’s become more known.

“But I actually think it applies to an awful lot of people and not just celebrities. I think a lot of people have them because it’s stylish and because it helps the hair look good.”