Also important, however, is simultaneously carrying out a system encouraging officials to not only “avoid the wrong, but also actively do the right,” Seoul’s first ambassador for performance evaluation of diplomats said.

“I am in charge of this positive part,” Kim Kyou-hyun, who is also the special advisor to the foreign minister, told The Korea Herald.

“By evaluating officials regarding their performances, the ministry can encourage those doing well to do better and help those who lag behind,” he said. “This is a nurturing system that will be carried out separately from the disciplinary measures. We believe it is important for these positive and negative systems to go together.” 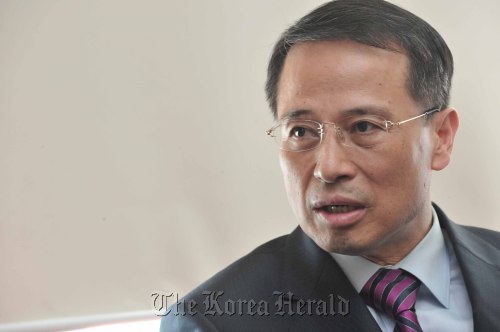 Kim Kyou-hyun, Seoul’s first ambassador for performance evaluation of diplomats, talks about the evaluation system from his office. (Chung Hee-cho/The Korea Herald)
Kim was appointed as the chief of evaluation in April as part of the ministry’s efforts to tighten control on diplomats at overseas missions.

An embarrassing sex scandal involving South Korean diplomats in Shanghai was made public earlier this year, only months after the Foreign Ministry came under fire for a nepotism scandal that led to the resignation of its minister. The Foreign Ministry, often considered an organization of elites, faced harsh criticism for failing to train its officials properly on ethical issues.

Taking office from the disgraced minister in September, Foreign Minister Kim Sung-hwan has been making efforts to reform the ministry’s overall personnel management and work procedures.

Kim, who entered the Foreign Ministry in 1980 and has served as the special adviser to the minister since December 2009, will be in charge of evaluating 156 South Korean diplomats currently working overseas.

The officials will be asked to draw up a plan every year and report back to Seoul on the results of implementation its eight different sections, including finance, culture, resource development, leadership and policy promotion.

Heads of the respective departments in Seoul will then review the reports with department members, after which Kim will make an overall evaluation to report to the minister.

“I suppose my job is to become an extension of the minister’s eyes and ears as he does not have the time to do everything,” the ambassador said. “These annual reports will be accumulated to become the most important and objective data on officials.”

The ministry is currently putting the final touches on the evaluation system, Kim said, adding that a pilot program will start in July or August.

“We are thinking of making public good cases for other diplomats to benchmark,” he said.

The ministry will refer to the evaluation results when appointing ambassadors and consul generals in the future, according to Kim.

“Only those who deserve the post will be dispatched,” he said. “Officials who lag far behind others will be called back in even if their term is remaining, while those who perform well will be asked to work overseas more than two, three times.”

In the past, Foreign Ministry guidelines limited overseas mission chiefs to a maximum of two periods of service, each spanning three years.

“It is a highly difficult and sensitive job to evaluate people in light of their achievements,” Kim said. “Because it is important that officials feel they have been evaluated by fair standards, we plan to set up a separate system for them to make objections if necessary.”

Kim, who formerly worked at the Korean Embassy in the U.S., said it was important for diplomats to “catch up with the social changes.”

“Practices that were considered okay three decades ago are no longer tolerable in our society,” he said. “The society has changed and the people we serve have changed. Changing the system and strengthening surveillance are important, but it is more important for each official to catch up with these changes and feel a sense of heavy ethical responsibility as servants of the people.”

Kim is upbeat about the outlook of changes in the ministry officialdom, though.

“Through a democratic and transparent system, we are slowly adapting to the changes so that family, school and regional ties no longer play any role in personnel matters,” he said. “Once this atmosphere settles in completely, the Foreign Ministry will be able to put behind its past and move forward.”