Vinegar, we put it in our salad dressings and dip dumplings in it with some soy sauce. 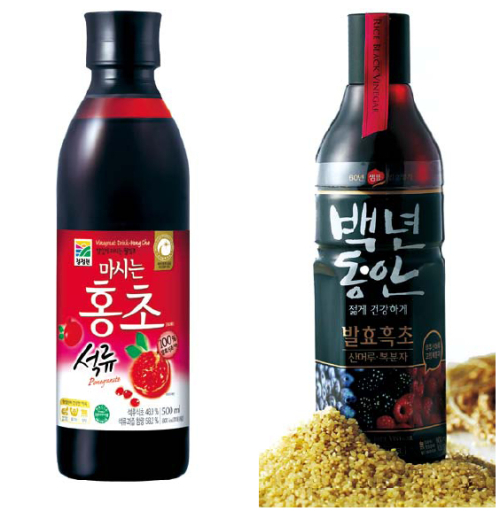 (Left)Daesang Chungjungwon’s Drink Hong Cho played a key role in making vinegar drinks trendy in Korea. (Daesang Chungjungwon)(Right)Sempio’s Drinking Rice Vinegar is made from brown rice and helps prevent obesity and high blood pressure. (Sempio)
Rival Sempio Foods put out their version nearly a year later, in 2006, but the corporation’s chairman, Park Seung-bok, got vinegar noticed as a health drink in 2005, the same year Daesang’s beverage came out on the market.

“Chairman Park discussed how he consumes it three times a day and that got major press,” said Sempio PR manager Shim Seon-ae, 36.

If we are really going to nitpick over where the trend came from, according to Sempio R&D team researcher Lee Jong-yeoul, 39, it came from Japan.

Right now, there are many different kinds of vinegar out on the market, but it was black vinegar made from rice that took off as a health tonic in Japan in 2003 and 2004.

Black vinegar was introduced into Kagoshima, Japan from China about 200 to 300 years ago, said Lee. The region became famous for its large population of long-living inhabitants.

When it was discovered that the denizens of Kagoshima consumed lots of black vinegar, it caught on as a sort of fountain-of-youth-type elixir that boasts various health benefits.

According to medical facility Chaum’s Food Therapy Center medical nutritionist Yoo Hye-won, vinegar breaks down the lactic acid that makes us tired so we feel perky and revved up.

In regards to black vinegar made from brown rice, which serves as the base for Sempio’s Drinking Rice Vinegar, it is good for preventing obesity, high blood pressure and diabetes, Yoo added.

The health benefits of vinegar have definitely played a crucial role in making it a major “it” tonic.

Sempio’s Drinking Rice Vinegar, a revamped version of the less successful 2006-released original, brought in 25 billion won in sales a year after it was released in 2009. This year, plans are to more than double sales and rake in 60 billion won.

In other words, the vinegar drink trend is far from dying down. In fact it looks like it is booming.

It certainly helps that another type of drinking vinegar, made from bananas and brown sugar, has gained attention as a diet beverage reportedly enjoyed by celebrities like K-pop singer Seo In-young.

April Market, a Sinsa-dong bistro near Garosugil that opened two months ago, put a homemade banana vinegar beverage on their menu in hopes of attracting women aware of its reputation as a diet drink.

“We put a banana vinegar drink on our menu, because there are lots of women in Garosugil and the drink is seen as good for dieting,” said April Market master chef Kim Hyun-jung, 27.

Nutritionist Yoo did not mention whether or not banana vinegar is effective in weight loss but did claim that it helps lower one’s blood pressure. 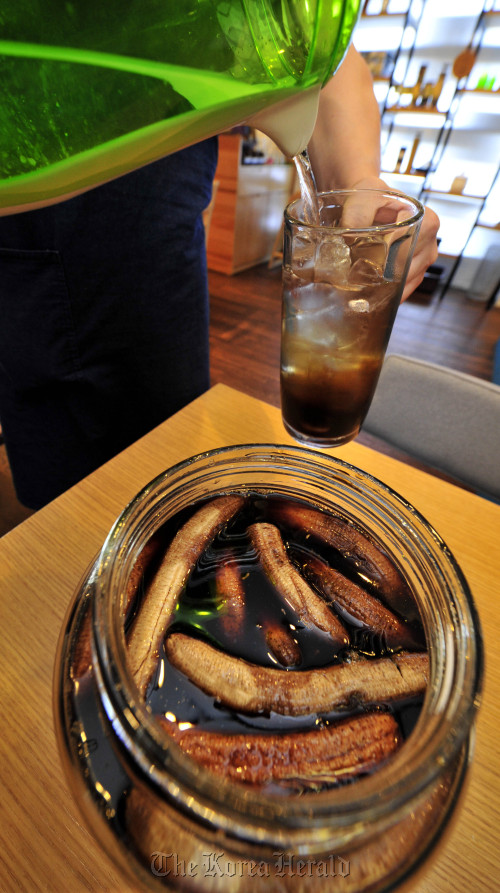 April Market’s homemade banana vinegar drink makes for a refreshing summer beverage. (Kim Myung-sub/The Korea Herald)
While vinegar certainly has its perks, Chaum Food Therapy Center professor Lee Gi-ho, 41, points out that it is acidic, and if you drink a large amount on an empty stomach in the morning it may hurt your stomach lining or cause acid reflux or gastritis.

Chaum’s Lee recommends avoiding vinegars meant for cooking, which, unlike drinking vinegars, have not been watered down for direct consumption.

Most drinking vinegars, like Sempio’s Drinking Rice Vinegar, are sold as a concentrate meant to be further diluted with water or milk.

The question is: Does it taste good?

Both Sempio’s drinking vinegar (diluted, of course) and April Market’s iced banana vinegar beverage pack a nice sugary tang and a tart kick, putting an end to any concerns about an off-putting, mouth-puckering experience.