Shave ice, as the locals call it, has its roots in Asian culture, as it was Japanese plantation workers who first started shaving ice with machetes and flavoring it with fruit juice. 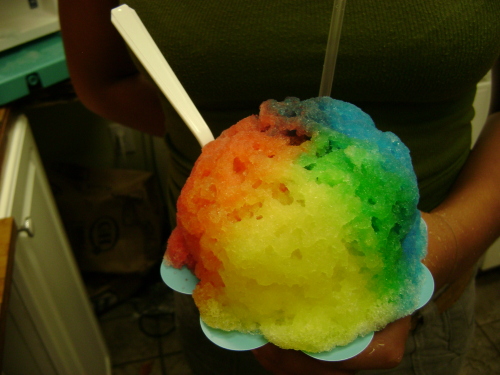 One of the near infinite flavor combinations available at Ululani’s, topped off with passion fruit, lemon, green apple and blue raspberry syrup. (Ululani’s Shave Ice)
Since then, the dessert has become symbolic of the diversity on the islands, with toppings such as sweet red beans, or pat, little rice cakes, and even macadamia nut ice cream, but the focus is on the syrup.

The frozen treat is a seemingly simple concoction of shaved ice, syrup and toppings, but there is nothing simple about the taste or the texture.

And for those finding themselves on Maui, it is Ululani’s Hawaiian Shave Ice that reigns supreme, which has also reached foodie blogs in Korea some 7,000 kilometers away, and for good reason.

At Ululani’s, which first started in Washington, owners David and Ululani Yamashiro pride themselves in the texture of their ice, which is so velvet-like that it surprises most customers.

“Our ice is super fine and soft, the softest possible,” said David Yamashiro.

The Yamashiros also make their own syrups using premium ingredients such as pure cane sugar, and fruit extracts and purees. And true to the island feel of things, their syrups hit right on with tropical flavors like coconut, pineapple and mango, which Yamashiro said is “like biting into a fresh cold mango.”

For pure coconut nirvana try their Haleakala ― coconut and leche syrup topped off with a “snow cap,” or a cream mix. If you are feeling particularly naughty, add their macadamia nut ice cream.

As for a cherry on top, the staff at Ululani’s excels at customer service, which any out-of-town vacationer welcomes.

And with vacationers groaning and moaning on their first bites, it makes sense that the Yamashiros are planning to open a fourth location on the island.