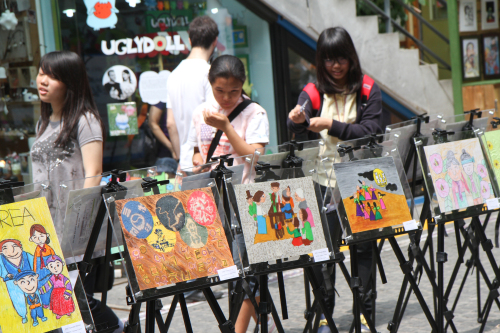 The event was held on Saturday at Ssamzie-gil in Insa-dong to raise awareness of the disorder that affects around 40,000 people in Korea.

The EKF organized the 2011 EKF’s 2nd Autistic Children’s Drawing Contest to give autistic children an opportunity to express how they view Korea and Korean values.

Even though autism is a lifelong condition, it is still considered by many people to be curable illness. The exact cause of autism is still unknown.

Almost 400 autistic children across the country registered entered their drawings over the past two months. The best 50 drawings depicting the beauty of Korea were then selected by a professional artist and displayed over the weekend to give the general public a chance to interact with people with autism.

The EKF also held a ceremony presenting awards to the students who drew the 50 selected pictures.