Gere worshipped with his palms pressed together as he entered the main building of the temple.

After burning incense, he signed the temple’s guest book with a message that wished “peace and happiness” for all beings in the world. 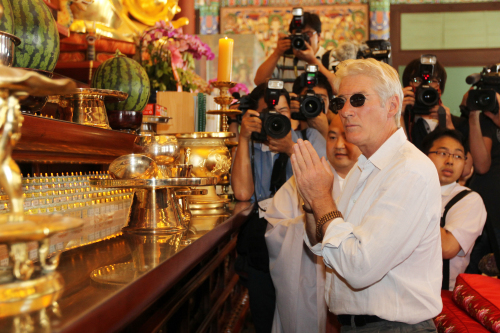 American actor Richard Gere worships during his visit to Jogye Temple in central Seoul, Tuesday. (Yonhap News)
The Hollywood star then met with Ven. Jaseung, the head of the Jogye Order. While Gere gave Ven. Jaseung a bouquet of flowers and some photographs he took whilst visiting Tibet as gifts, Ven. Jaseung presented Gere with three ceramic incense burners, Buddhist prayer beads, and a Buddhist costume for use during his temple visit. Gere is scheduled to visit Donghwa Temple near Daegu and Tongdo Temple near Yangsan City, South Gyeongsang Province, on Thursday. At the two temples, Gere will participate in meditation, chanting and other Buddhist practices that are part of temple programs.

Gere is scheduled to attend promotional events on Wednesday for his Buddhist-themed photography exhibition, titled “Pilgrim,” which is currently being held at Seoul Arts Center in Seoul. The exhibition runs till July 24.

The exhibition features a total of 64 photographs of Tibet and India taken by Gere himself, as well as 24 photos of Tibet by 24 photographers, including Annie Leibovitz, Steve Meisel and Jerry Uelsmann.

Gere is scheduled to leave Korea on June 25.