With the North continuing to launch military provocations, some here have raised the need to station U.S. nuclear weapons here, all of which were withdrawn after the two Koreas adopted a joint declaration on the denuclearization in 1991. 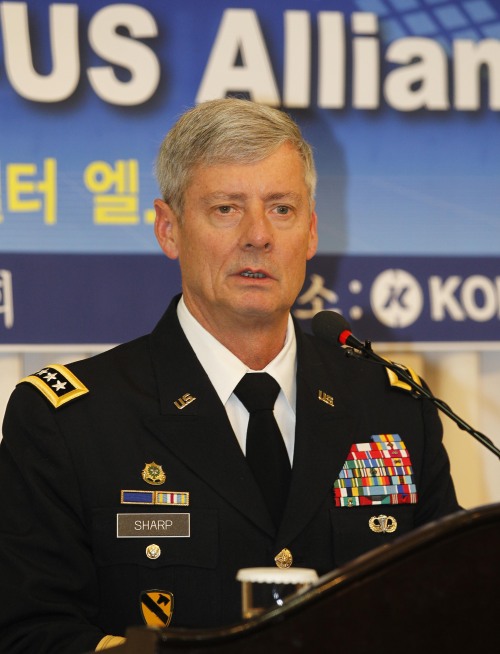 U.S. Forces Korea Commander Gen. Walter Sharp delivers a speech during a breakfast meeting hosted by the Association of the Republic of Korea Army in Seoul on Monday. (Yonhap News)
“What the U.S. has guaranteed through extended deterrence, which includes the nuclear umbrella, has the sufficient capabilities we have from stocks in different places around the world in order to be able to do what we need to be able to deter North Korea from using nuclear weapons ... They don’t have to be stationed here in Korea for either deterrent capability or use capability.”

His remarks apparently indicated the position of the U.S. government over the issue, observers said.

His predecessor, Burwell B. Bell, who served as USFK commander from 2006-2008, also echoed his view during his visit to Seoul last week for a security forum, stressing that what matters is the “credibility of the U.S. nuclear umbrella” for its key Asian ally.

“What is necessary is for North Korea to understand with certainty that the U.S. is a reliable ally and fully prepared to meet our security commitments to our ally, the Republic of Korea, including providing the nuclear umbrella.”

Sharp, who took office here as the USFK chief in June 2008 and will return home next month, also pointed out that the recent spate of North Korean provocations was obviously challenging, but helped strengthen the South Korea-U.S. alliance.

“I hope Kim Jong-il understands that the strength of this alliance is now in the very firm belief by the people of the ROK that if North Korea strikes again, there will be a very strong, appropriate response going back into North Korea that the capability is real, we have the plans in place to make that happen.”

To the question of what he thinks is most crucial to help the South hone its capability to stand on its own after the transfer of wartime operational control, due in December 2015, he stressed that synchronization between the two allied militaries is of great importance.

“The biggest (as we prepare for the OPCON transfer) is to make sure that what the ROK Joint Chiefs of Staff chairman and its staff are seeing on the battlefield, the command and control of it, is exactly the same as what, at the time of 2015, the Korea commander will see. That synchronization between the two commands is most critical,” he said.

“What is interesting, all these North Korean provocations over the last several years has actually made us stronger in that specific field because it has forced us to make sure that we have the command and control capabilities. The CFC (Combined Forces Command) and ROK JCS, we practice for real on a day-to-day basis that synchronization between those two commands.”

“As we move forward, CFC and USFK remain committed to ensuring that the necessary capabilities and systems remain in place prior to, and after, OPCON transition,” he said.

“I fully understand that sufficient time is required for the JCS to gain the necessary proficiency in mission execution procedures required for the defense of the ROK. I am convinced, however, that the timing of the national defense reform plan is right as we move toward implementation of Strategic Alliance 2015.”