[ The Korea Herald – Send E-mail ]
N.K. threatens to ‘dispose’ of assets at Geumgang
By Song Sangho
Published : Jun 17, 2011 - 19:25
Updated : Jun 17, 2011 - 20:02
North Korea said Friday that it would dispose of South Korean assets seized or frozen at its Mount Geumgang resort under a newly established law, a move that could further aggravate already chilled inter-Korean ties.

The North also said that Hyundai Asan Corp., the central operator of the inter-Korean tour program, should come to the mountain on the east coast by the end of this month to discuss disposal issues, according to its official Korean Central News Agency. 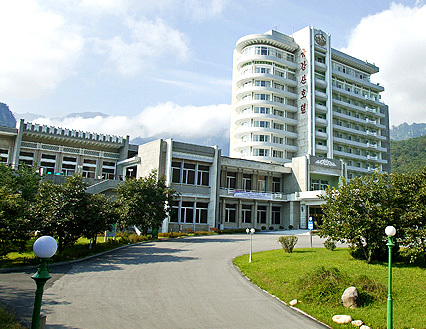 Experts here said that the North is apparently trying to further pressure the South while it endeavors to enhance ties with sole ally China, indicating that its economy can move forward without the help of the South.

“According to the law on the operation of the special international tourism zone, (we) will dispose of all assets including real estate within the special zone,” said a notification carried by the KCNA.

“So, we notify all South Koreans holding assets at the special zone that they should come to Mount Geumgang for talks on the disposal of their assets by (June) 30.”

In April, the North announced that it would establish a special international tourism zone at the mountain. On May 31, it created a law to allow foreign companies and individuals including South Koreans to invest into the resort, and announced it on June 2.

The notification also stressed that since the establishment of the new law, the Geumgang tour program has gained “unprecedented international attention.”

Seoul’s Unification Ministry said that Pyongyang should keep bilateral tourism agreements, stressing that it should not infringe on the property rights of South Korean companies involved in the tour program.

“We will come up with measures to respond to the notification after we consult with South Korean businesses involved in the tour program,” said a ministry official, declining to be named.

The Mount Geumgang tours were a symbol of inter-Korean reconciliation following the first-ever inter-Korean summit in 2000 and an important source of foreign currency for the cash-strapped North.

But they have been suspended since a South Korean tourist was shot dead by a North Korean soldier there for allegedly trespassing into a restricted area in July 2008.

The North has repeatedly called for the resumption of the tours, but the South has maintained that tours will not resume until the North provides a better explanation for the shooting and guarantees full-scale safety measures for tourists in the future.

The North is said to have raked in $1.5 million in 2006 and $2 million in 2007 through the inter-Korean tour program. Following the suspension of the tours to the mountain, tours to Gaeseong have also been suspended.

In an angry response, the North last April seized or froze South Korean assets at Mount Geumgang, including a government-owned family reunion center.

North Korea experts here pointed out that the North appears to be stepping up pressure on the South through measures that may prove more effective.

“Including its recent revelation of the secret contacts for inter-Korean summits, the North is apparently continuing its offensive against the South with more concrete means above abstract means (it has used in the past),” Kim Yong-hyun, professor of North Korean studies at Dongguk University, told The Korea Herald.

“With the moves to dispose of South Korean assets, the North seeks to further pressure the North while it tries to convey a message that it has another reliable partner (China) to fall back on despite its worsening economic travails.”