LONDON ― What’s the first place that comes to mind when one thinks of London? Perhaps Big Ben, the River Thames, the London Eye or St. Paul’s Cathedral.

But now the Korean Culture Center in London is hoping to be included on the list of the city’s top visitor attractions.

Located just next to Trafalgar Square, overlooking the National Gallery, the center is, in fact, already a popular spot for Londoners.

Housed in a modern building, the culture center is nestled among office buildings. Inside, it is all smooth concrete and wood, mixing traditional and modern architecture.

The two-story center consists of a reception, exhibition space, seminar area, multi-media rooms and a library.

“We have a really good location,” said Won Yong-gi, the director of Korean Cultural Center. 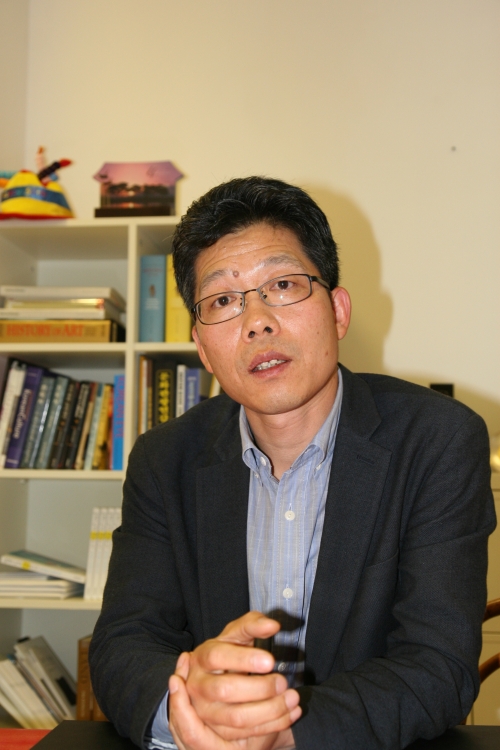 Director of the KCC in London Won Yong-gi. (Oh Kyu-wook/The Korea Herald)
Despite the short-history of the center ― it opened in 2008 ― it now attracts tens of thousands visitors every year, according to him.

Korea once meant only kimchi and a few restaurants here, but Korean cinema has become a new facet of the city that is filled with immigrants and often divided by class or nationality, said Won.

The Korean Culture Center has helped build a growing matrix of Korean film fans with its annual film festival. Last year, the film festival was held at three different venues in London, including the Institute of Contemporary Arts, London’s most illustrious arts venue. 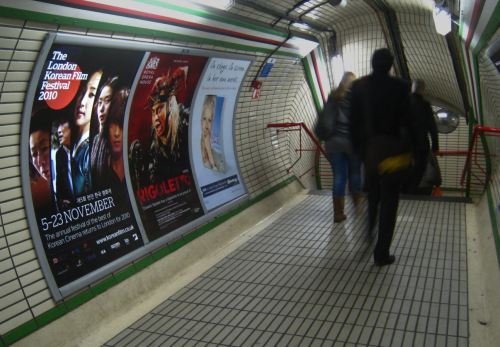 Advertising on the London Underground for the 2010 Korean Film Festival. (KCC)
The week-long festival screened 33 films last year with more than 4,000 people attending, compared to 3,324 in 2009. Acclaimed Korean directors, such as Kim Jee-woon of “I Saw the Devil,” Im Sang-soo of “The Housemaid,” Lee Jeong-beom of “The Man From Nowhere” and Jang Jin of “Good Morning President” attended the festival to introduce their films.

This year the annual film festival, scheduled for November, will be expanded outside of London, expecting to attract more than 5,000 people, Won claimed.

Now, the Korean Culture Center has an ambitious plan to become a center of Korean films in Europe. It will open a library that includes more than 1,000 Korean films, covering a wide spectrum of subjects and genres with the help of Tony Rayns, according to Won.

Rayns, who is well-known for his expertise in East Asian cinema, has long been working as a coordinator for London Film Festival and Vancouver Film Festival.

The English film critic has a collection of more than 1,000 Korean films, but decided to donate his whole library to the center.

“The Korean Film Archive center also promised to help set up a film archive here. We’re planning to open it in November. It will become the first and largest Korean film archive in Europe,” Won said.

In addition to the Korean film festival, the cultural center offers a variety of programs ranging from art exhibitions, literature workshops, language courses and even a charity auction. 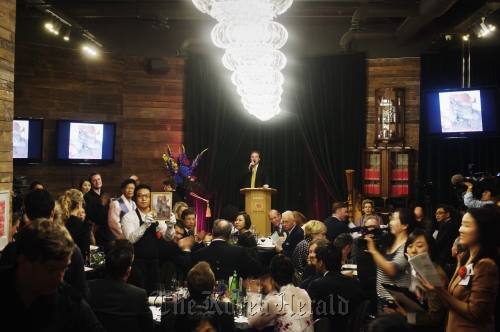 Some 58,000 British servicemen, the second-largest number of foreign troops, fought under the U.N. flag, and around 4,000 of them are alive today.

“At first, we just wanted to hold a small event to commemorate the 60th anniversary of the Korean War,” said Won.

So the culture center hosted a special art exhibition called “Present from the Past,” inviting 40 Korean artists to produce artwork regarding the Korean War, and send postcards featuring the artwork to the surviving veterans.

“We wanted to donate some money to them. So we decided to host an auction, and it turned out to be a great success,” he said.

Two auctions sold 40 works donated by the artists, raising a total of 20,180 pounds (around $33,000). The auctions were complemented by cuisine by a renowned chef from the Intercontinental Grand Hotel in Seoul.

This year the Korean Culture Center is planning to organize another charity auction. Titled “A Present for the Children,” around 50 works will be auctioned in August at London’s iconic department store Harrods. All the proceeds will be donated to Great Ormond Street Hospital Children’s Charity.

According to the director, the purpose of the charity is not only to raise funds but also to promote Korean arts.

“We invite young promising artists for the charity. We believe it is a good opportunity for them to show their artwork in the mainstream market,” Won said.

“We’re planning to run this charity auction every year.”

Another interesting project hosted by the London culture center is K-pop night.

In February, hundreds turned out for one such event combining DJs, musicians and flashing lights transforming the culture center into a club. The center can accommodate up to 200 people, but more than 600 people turned out and people had to wait for hours to get in.

Was it worth the wait? One of the participants, Ikra Aziz wrote: “It was amazing. I traveled six hours from Glasgow and it was worth it.”

After watching teens and 20-somethings dancing to Korean pop music, the director finally realized that K-pop could be a key to attracting new audiences here.

Following the successful K-pop night, the Korean center hosted a K-pop contest in cooperation with YG Entertainment, the agency of K-pop groups Big Bang and 2NE1. And it is now planning to host its first ever K-pop concert at London’s Royal Albert Hall, one of London’s famous landmarks, before the end of this year.

“Our center is attracting more young people because we offer great art, fun and a variety of activities to enjoy,” the director said.