SYDNEY, June 16, 2011 (AFP) - The longest lunar eclipse in more than a decade turned the moon blood red on Thursday, yielding a rare visual treat for stargazers across a large swathe of the planet from Australia to Europe.

The first eclipse of the year -- when the Earth casts its shadow over the moon -- was seen in parts of Europe, Africa, Asia and Australia.

Often the moon turns brown in an eclipse but this time it became a reddish, coppery colour.

Contrary to some Internet chatter, the moon's vivid red hue was not necessarily the result of ash from the erupting Puyehue volcano, high in Chile's Andes, according to Sydney Observatory astronomer Geoffrey Wyatt.

"The red colour is not caused by dust in the atmosphere. What dust does is extinguish colour and make it look darker."

The terrestrial shadow started to fall at 1724 GMT and lifted around 2300 GMT, although "totality" -- when the lunar face is completely covered -- lasted 100 minutes. That was the longest since July 2000.

While keen astronomers in parts of Australia had to contend with dense cloud cover and rain, others had a clearer view.

Around 130 people watched at the Sydney Observatory, with one woman dressed as a vampire.

"There was (also) a child dressed very elegantly as if she was from another century, and a little boy dressed up as a red superhuman," the observatory's manager Toner Stevenson said.

Professor Fred Watson, chief astronomer at the Australian Astronomical Observatory, said the best view would have been from the moon itself.

"If you could watch the phenomena, you would see the Earth moving across the sun and it creating a brilliant red rim around the Earth," he said.

In Singapore, more than 700 people gathered outside a science centre to watch.

Some avid enthusiasts staked out spots more than four hours ahead of schedule with the centre organising astronomy talks and movie screenings to entertain the audience.

There were similar scenes in the Philippine capital Manila where hundreds of amateur and professional astronomers converged before dawn to catch a glimpse.

With blankets and flasks of coffee, they were rewarded with clear skies.

"I will never get tired of watching these events," said Maximo Sacro, 67, the retired curator of the National Museum Planetarium who dusted off his telephoto lens to capture the image.

"The moon's entry into the Earth's shadow was right smack in the middle, it was just perfect. It was very rare and the duration was long."

The eclipse was widely seen across Pakistan and India, with crowds gathered at the Nehru planetarium in New Delhi, which organised a "moon carnival", setting up special viewing telescopes.

But traditionalists were not as enthusiastic, with authorities at several Indian temples reportedly shutting their doors to ward off the supposed "evil effects" of the eclipse.

In the Afghan capital Kabul, mosques were packed, as crowds recited verses from the Koran and offered special prayers.

"In Afghanistan, people believe that the eclipse is a sign of the power of Allah," said Mir Ahmad Joyenda, an Afghan analyst who commentates on culture and society.

"People usually offer special prayers and shout Allah Akbar (God is great) at the time of the eclipse. Most of them are not aware how and why the eclipse takes place."

While the phenomenon could not be seen everywhere, including the United States, space lovers still got a chance to see it unfold as Google teamed up with Slooh.com.

Slooh accesses telescopes around the world and Google live-streamed the event, with audio narration from astronomers. And on its home page, Google replaced its usual banner "doodle" with an animated eclipse. 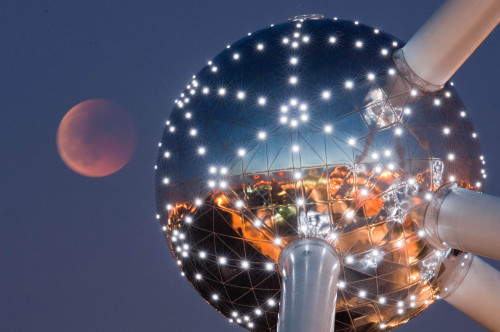 A lunar eclipse is seen over the Atomium in Brussels, early Thursday, June 16, 2011. (AP-Yonhap News) 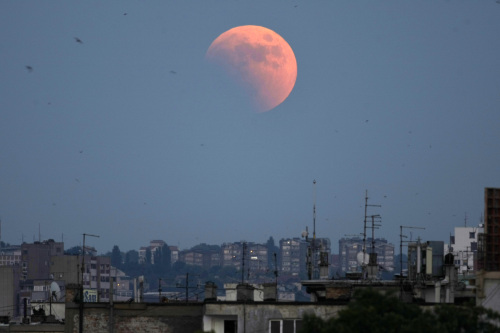 A partially eclipsed moon rises on the sky over Belgrade, Serbia, Wednesday, June 15, 2011. The total lunar eclipse was visible throughout most parts of Europe on Wednesday evening. (AP-Yonhap News) 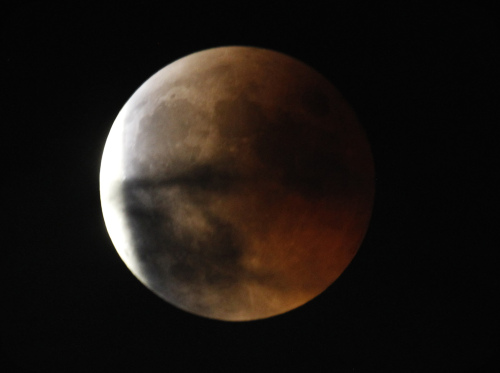 The partially covered moon is seen at the end of the lunar eclipse in the sky over the capital Sofia, Bulgaria, Wednesday, June 15, 2011. (AP-Yonhap News)