[ The Korea Herald – Send E-mail ]
FDA issues new rules for sunscreen protection labeling
By 배지숙
Published : Jun 16, 2011 - 18:19
Updated : Jun 16, 2011 - 18:19
LOS ANGELES ― The Food and Drug Administration on Tuesday issued new guidelines for sunscreen labeling that will give consumers better information about the products’ effectiveness and that will, for the first time, allow labeling to claim that sunscreens protect against skin cancer and early skin aging.

The agency has been considering such regulations since 1978 and released some proposed rules in 2007, but subsequently concluded that the labeling system proposed then would be too confusing for consumers. 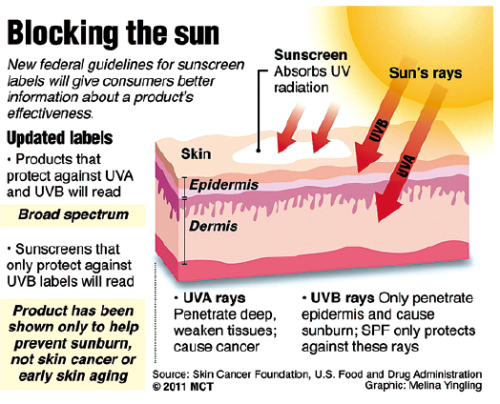 The agency has developed new protocols for testing the products’ effectiveness at blocking the sun’s rays. Under the new guidelines, sunscreens may be labeled “broad spectrum” if they block UVB radiation and a percentage of UVA radiation. UVB is the major cause of sunburn, while both UVA and UVB cause early skin aging and skin cancer.

Sunscreens will no longer be able to carry an SPF value higher than 50: the highest category now will be 50-plus. “We don’t have sufficient data to show that those with an SPF higher than 50 provide greater protection,” Woodcock said.

Protective products will no longer be allowed to be labeled as sun blocks because there is no evidence that they block all the radiation in sunlight. Products also may no longer be labeled “waterproof” or “sweat proof.” Instead, they can only be called “water resistant,” and labels must state clearly how long such protection lasts ― either 40 minutes or 80 minutes.

The new labels must be in place by the summer of 2012, Woodcock said, but the agency hopes that companies will implement them sooner.

Woodcock also noted that there has been some concern about sunscreens containing nanoparticles of zinc oxide or titanium dioxide that block sunlight. Some critics have suggested that the extremely small particles can penetrate the skin and cause health problems.

But Woodcock said the agency has recently performed animal testing and found that the nanoparticles do not penetrate the skin. The findings “agree with studies published in the literature,” she added. There is currently no evidence to suggest that other chemicals commonly used in sunscreens are dangerous, she added.

An estimated 3.5 million Americans develop skin cancer each year, according to Dr. Ronald L. Moy, president of the American Academy of Dermatology. Both skin cancer and melanoma are readily curable if detected early, but melanoma that has spread throughout the body is exceptionally difficult to treat and generally proves fatal, he said. “Every hour, an American dies of melanoma,” he said.

All types of skin cancers are increasing in young people, especially females, he noted. Researchers attribute that to the propensity of young women to bask in the sun and to use indoor tanning beds.

The academy, he said, recommends that people use a sunscreen with an SPF of at least 30. He also noted that most people do not use enough. People should use about one ounce to cover their bodies, a glob about the size of a golf ball.