More than 200 films of genres including horror, fantasy, mystery and animation will arrive next month.

The festival will open with “Bollywood: The Greatest Love Story Ever Told,” an Indian documentary film directed by Rakeysh Omprakash Mehr and Jeff Zimbalist.

The non-fiction film features a number of major romantic Bollywood films in history, allowing its viewers to enjoy and learn about the Bollywood genre and its unique charm.

The festival’s closing film has been selected to be “Blind,” a Korean thriller that tells a story of a young blind woman who happens to be the only witness of a fatal hit-and-run accident, is the festival closer.

The winner of the section will be awarded a 15 million won ($14,000) prize, while the runner up will receive 10 million.

For the international short film competitive section, seven foreign films and five Korean films have been selected. The winner of this section will receive 5 million won worth of prize, while the runner up with be given 3 million won.

This year’s program is extremely diverse, offering many different ways to enjoy the festival. For those who are into gruesome and bloody Japanese movies, check out the festival’s “Forbidden Zone.” The featured movies in this program, including Yudai Yamaguchi’s “Deadball” and Yoshihiro Nishimura’s “Hell Driver,” are all about zombies, robots, aliens and even the notorious yakuza criminals.

For horror movie lovers, “J-Horror The Last Chapter” offers the classics of Japanese horror films, including Nobuo Nakagawa’s “Kenpei to yurei (A Soldier and a Ghost)” and Hideo Nakata’s “The Ring.” 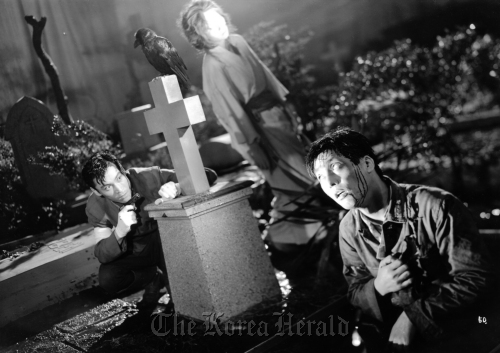 A scene from “Kenpei to Yurei” (A Soldier and a Ghost) by Japanese director Nobuo Nakagawa. (Pifan)
Another program, “Fear of 3-D: Genre Masters” will screen three films of unconventional genres in 3-D. One of the three is “Battle Royale” by Kinji Fukasaku, a gruesome tale of a group of high school students in a totalitarian regime who are forced to kill each other to survive.

“Korea Retrospective: Park Nou-sik: The Man Who Watched Too Much” will screen five films of late Korean actor-director Park Nou-sik (1930-1995), who directed many action films with quirky narratives.

The festival will offer many outdoor screenings, as well as an opportunity for the participants to camp outside and watch movies. Visitors can bring their own tents and camping equipment, or rent them for free at the festival site in Bucheon.

The festival runs till July 24. For more information about the festival and camping opportunities, visit www.pifan.com