The country superstar will unveil a new stage design when his tour starts Thursday in Biloxi, Mississippi. Urban often tucks away ideas he comes up with while standing on stage in front of thousands of fans. He noticed on his last tour that when he descended ramps at each end of the stage, nearby fans were practically in the concert.

So he built a curved stage with a continuous ramp from side to side, erasing the barrier.

“I just think our audiences are there to have a good time,” Urban said. “I want them to feel liberated, that they can do whatever they want to do. If they want to dance and scream and cheer, they should be able to do that and not feel like someone’s going to come and tell them to sit down.” 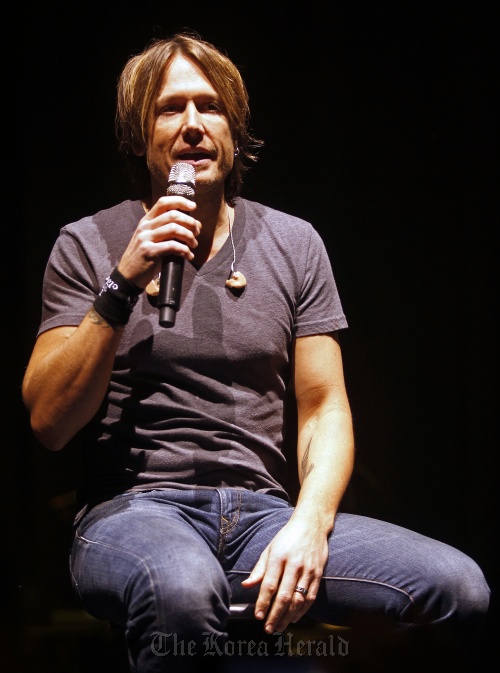 Keith Urban talks about his 2011 Get Closer Tour at Municipal Auditorium in Nashville on June 9. (AP-Yonhap News)
Urban previewed his tour for reporters and a select group of a few hundred fans last week during the CMA Music Festival at Nashville’s Municipal Auditorium. He showed off the stage and played a few songs in front of a video screen that flashed concert footage, artwork and video interludes with other country artists.

The Australian singer’s tours are among country music’s most anticipated. Pollstar figures show his Defying Gravity Tour, which kicked off in 2009, grossed more than $51 million with more than 763,000 tickets sold. He sold 88 percent of tickets available and averaged 10,600 attendance.

That’s country gold. And to maintain that standard, Urban is working to keep his show fresh. Along with the scalloped main stage, he’s got four others set up around the arena.

That includes “one that’s tiny and moveable every night and it allows me to go anywhere in the arena from night to night. It’s always different,” he said. “The one thing with social networking and YouTube is people already know what you’re doing. They’ve already seen the show. There’s no surprises any more. So I figured out the idea of the moving stage and it will never be in the same place twice.”

Urban will mix his hits with new material from his latest album, “Get Closer.” Urban played that album’s lead single “Put You in a Song” for reporters and visitors gathered along the stage, picking its addictive guitar hook in front of a kaleidoscopic pinwheel design on a circular video screen that has a “mirror, mirror on the wall” feel.

He said he’ll keep it mostly up-tempo, but will sprinkle in a few of the slow-burning ballads that have kept him one of country’s top heartthrobs for more than a decade.

“I’m just trying to make sure that everybody no matter where they’re sitting feels connected to what we’re doing,” Urban said. “I want to play with everybody, I don’t want to play at them. The audience reaction is a huge part of our show. The singing-back sections are just a huge part of what we do. Hopefully, we can play all the songs they want to hear and have them feeling better when they’re leaving than when they got here.”