As students take to the streets for cheaper university tuition ...
Should government pay half for college?

In recent days thousands of students have been taking to the streets to demand lower college fees, spurred on by recent pledges by both the Grand National Party and Democratic Party to cut the price of tuition.

Student protests against rising fees are a common occurrence in Korea, but have been especially vocal since new GNP floor leader Hwang Wooyea last month pledged to halve college fees for lower income households. Hwang later shied away from the 50 percent figure, saying the government should help ease the burden of tuition, without going into specifics.

The GNP first brought up the idea of halving college fees for students in 2006 while in opposition. Halving tuition fees was also a campaign pledge of President Lee Myung-bak, a pledge which has so far failed to materialize. Following the GNP, the DP has announced its own even more generous plans to cut fees, which are the most expensive in the OECD after the U.S.

Between 2006 and 2010, college fees rose 28 percent, well above general
inflation for the period of 16 percent. The average annual cost of tuition is now 4.4 million won ($4,060) for a public college and 7.7 million for a private institution. Both parties now agree on half-price fees though division continues over the scope of the plan and budget.  A National Assembly  vote on the half-price college fees plan is scheduled for late July. 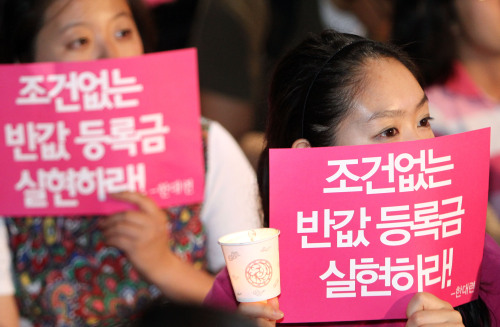 Students protest for lower college fees in Seoul on Sunday. (Yonhap News)
We must invest in our country’s young people

On May 22, Grand National Party floor leader Hwang Woo-yea stated his intention to go ahead again with the public pledge of “half-tuition fees.” The situation has become so dire that even the government and the ruling party, after having shirked their responsibilities over the last three years, are making haste to settle the matter of school tuition.

At last, universities in Korea have opened the era of the “10 million won tuition fee,” a result of the continual hikes of two to three times the average price every year. The sum amounts to 25 percent of the average salary of workers in Seoul, and is more than those earning minimum wage (4,320 won per hour) can make, even working 40 hours a week for a year. In reality, a significant portion of university students graduate from school in debt, with some entirely unable to pay their tuition, choosing suicide instead.

This society has long looked upon college education as “a rung on the ladder to personal success,” and accordingly, tuition fees as a personal investment. The government is seen as only responsible for education at the elementary and middle school levels, but not for higher education. However, this does not mean that non-compulsory education cannot be free. College education is not simply a private good, where a lack of personal investment equates to a lack of benefit. In fact most countries support their own college education systems to varying degrees. This means that they regard it as a kind of “public good,” in addition to being a tool for personal development, on the grounds that it contributes to national development.

In addition, government support for college education is necessary to ensure equality of educational opportunity, a right specified in Article 4 of our Framework Act on Education: (1) No citizen shall be treated with discrimination in education for reasons of sex, religion, faith, race, social standing, economic status or physical conditions, etc. (2) The state and local governments shall prepare and implement policies for minimizing gaps in educational conditions, such as supply and demand of teachers among the regions, to enable learners to gain access to equal opportunities in education.

Finally, there remain some practical problems. The college attendance rate for university-age students has sharply risen from 66.6 percent in 1999 to 81.9 percent in 2009. This is a result of the wide gap in earnings based on level of schooling. The income level of university graduates is far higher than that of graduates from junior colleges (1.3 times), high schools (1.7 times), middle schools (2.1 times), and primary schools (2.9 times). We also have serious balance problems in the labor market, with 50 percent of workers forming part of the temporary workforce. It is important to turn the long-term focus to the creation of “good jobs,” which can allow non-university graduates to benefit from higher standards of living. However, given the present realities it is unfair to impose tuition as an exclusively individual burden.

Finland is well-known as an educationally advanced nation, which, like our country, had great difficulties rebuilding its national system because of its long-lasting colonization, its small territory and its lack of natural resources. However, for this very reason, Finland was able to perfect its educational system, in the belief that each individual’s ability is highly important and to be cherished. And what of Korea, which is very similar to Finland in many aspects? In Korea, our university students must work part-time jobs in order to continue studying, and their parents suffer from long hours of hard work. As our government has always emphasized, Korea’s only true natural resource is its human capital. Accordingly, in the interest of national development, we have no choice but to invest in our people, that is, in our education. 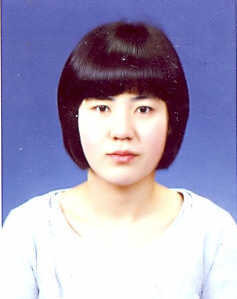 The author is coordinator of the Social Economic Rights Team with People’s Solidarity for Participatory Democracy. ― Ed.

As of May 24, Members of the National Anti-Populism Union had collected more than 420,000 signatures, topping the figure required to hold a referendum vote on the free school meal project. Members of the Populism Legislation Watching Civil Union started to receive sworn statements from lawmakers on June 1. Around the same time, some university students demonstrated in a candlelight vigil in front of Gwanghwamun to urge the government to honor its pledge to introduce half-price university tuition. On SNS such as Facebook and Twitter people are arguing for and against the tuition plan. But the Republic of Korea is now suffering terribly all over because of ruinous populist policies.

Given the chance, ruling and opposition parties would give the public free meals, free child care, free health care and half-price university tuition. Politicians’ pandering to populism is now at terrorist levels, as they make unreasonable promises without considering where funding will come from, just to gain greater popularity and more votes.

I think a financial support program to reduce the burden of college fees on low-income households is a good idea. As you may know, the government has implemented such a program already. This program is an income-contingent loan or university tuition loan system. This system should ease the tuition burden for students. It loans money to students for university tuition and lets them pay it back after they graduate and find a job. In addition to tuition fees, students can also borrow living costs of up to 1 million won per semester, or 2 million won annually. This program is problematic, however. If the compound interest ― about 5.7 percent ― throughout the loan extension period is added up, the money to be repaid is higher than what was borrowed. There is a risk that the system contains moral hazard as the money is hard to reclaim if the recipients go abroad.

The United Kingdom, United States, Australia and New Zealand have run income-contingent loans for university students. So, many universities have been well run on tuition loan system.

But I am completely against half-price university tuition. Actually, plans need to be made at government level to improve the income-situation for the poor.

I emphasize economic growth and some social welfare for the poor. Otherwise, eventually, people will have to pay too much. Citizens’ tax burden could increase a lot. The national debt will increase and the national storeroom will be empty. The government is just eating away at people’s tax money with ruinous populist policies. The half-price tuition measure inevitably means higher taxes in the long run. So, wise people should not like the communist nanny state. Politicians should come up with more practical and reasonable pledges.

At the moment, the government is concentrating on distribution rather than growth. This is well summed up in the lyrics of “More Ants than Grasshoppers” by Dr. Kim & the Poets (Kim Chun-ho is the head of the Center for Free Enterprise).

That does it, no farther!

At this rate, our debts increase

The traditional functions of government have been starved by the rapacious appetite of the welfare state. The state is still the main provider of welfare. This is quite a serious problem.

I believe that we are now in the transitional stage of transforming into a G10 country. So the government still must promote policies that emphasize growth rather than distribution of wealth.

Populism is a false picture of democracy. I say that the Korean economy is basically a capitalist economy. Also, I am a supporter of the free market economy. Sometimes, people love free stuff as it appears sweet. Then there are those dying to get some free money out of the government. There’s no such thing as a free lunch. Taxes will rise eventually because of such sweet measures. People are taken in by politicians’ honeyed words. We need to mind that honey. 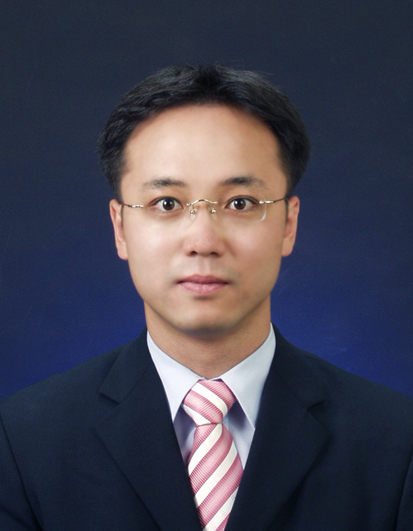 The author is planning team manager at the Center for Free Enterprise, a free market think tank. ― Ed.