“KAI is the country’s only comprehensive producer of aircraft materials since it was merged with Samsung Daewoo and Hyundai’s aircraft sectors in October 1999,” president Kim Hong-kyung told reporters at a news conference. 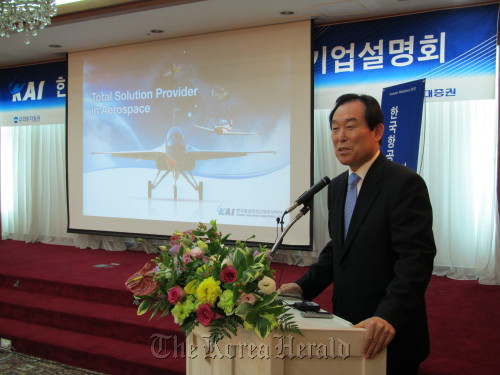 Kim Hong-kyung, president of Korea Aerospace Industries, announces the company’s plan to go public at a press conference in Seoul on Wednesday. (KAI)
The Korea Exchange in May approved KAI’s application to float their shares. It has a total of about 97.5 million shares to go public on June 30. The initial public offering is expected to be priced at around 14,000 won to 16,000 won, the company said.

Major shareholders including Hyundai Motor and Samsung are said to become investors of Korea Aerospace.

The company celebrated its first export earlier this week. It won a contract to export its T-50 trainer jets to the Indonesian government, the first supersonic jet developed in collaboration with U.S. defense company Lockheed Martin. Over 2 trillion won of funds were injected into the development of the T-50 model across 13 years, the company said.

It is currently under discussion with the deputy chief of United Arab Emirate’s air force for possible expansion into the Middle Eastern market. The deputy chief of UAE and Iraq defense officials are scheduled to visit Korea as early as next month. Iraq is considering purchasing 24 trainer jets while UAE is mulling the purchase of 50, according to news reports.