Third-generation chaebol family members appear to be rapidly consolidating their positions at the country’s largest conglomerates.

Among the grandchildren of chaebol founders, Hyundai Motor Group’s Chung Eui-sun is taking the fastest route to the top.

Having proven his mettle while president of Kia Motors Co., the younger Chung seems to have assumed the bigger role with relative ease. 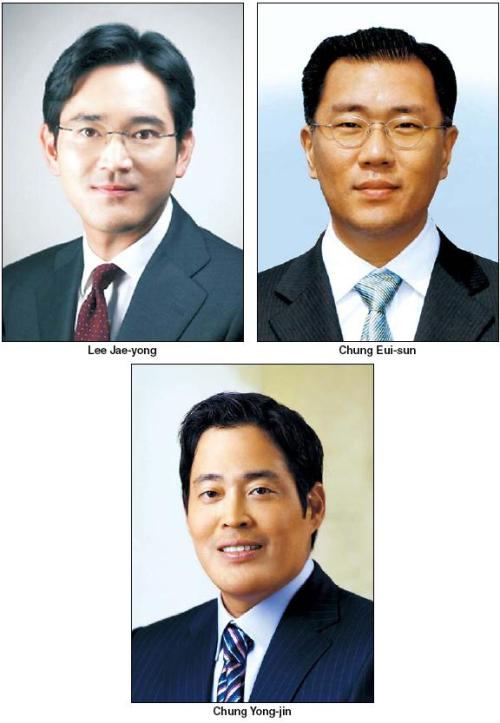 Chung is widely recognized as having been the driving force behind Kia’s design management that saw former Audi designer Peter Schreyer take the post of chief design officer.

In addition, Kia came back into the black under Chung’s watch.

In 2006, the first full year with Chung as its CEO, Kia recorded an operating loss of 125.3 billion won ($197.9 million). In the following year, Kia’s operating losses were drastically reduced to about 55.4 billion won. In 2008, the company posted operating profits of 308.5 billion won.

Since taking on the role of vice chairman of Hyundai Motor, Chung has continued to take part in key projects including one to create a new corporate identity for the carmaker. Before his promotion to vice chairman, Chung is also said to have been behind the partnership Hyundai and Kia formed with Microsoft Corp. for developing infotainment systems.

In addition to working behind the scenes, the younger Chung appears to be taking on a more public role.

“Chung Eui-sun appears to be doing well in a supportive role to his father. He is said to place similar importance on quality as his father,” an industry watcher said on condition of anonymity.

“And, Chung Eui-sun also seems to be just as hands-on as the chairman as he is known to make frequent visits to plants, and he has also been seen on stage at international motor shows presenting the company’s vision himself.”

Hyundai Motor Group, however, is not alone in bringing third-generation “chaebol kids” into prominent roles.

Six months since his promotion to the post of chief operating officer of Samsung Electronics, Lee Kun-hee’s son Lee Jae-yong is also appears to be taking on a more active role.

In January, the younger Lee met LG Group chairman Koo Bon-moo, with whom little exchange had previously occurred, and in April he reportedly held a meeting with POSCO chief executive Chung Joon-yang.

The senior Lee’s decision to go to work at the group’s office in Seoul is also interpreted by some as being part of grooming Lee Jae-yong to one day take over the group.

According to some industry observers, Lee Kun-hee may be personally training his son for chairmanship.

Since taking office as chief executive of Hotel Shilla and Samsung Everland, Lee Boo-jin has been in the public eye more often than her brother. In addition, she is credited with more than doubling her company’s share of the duty free market.

Shinsegae Group vice chairman and chief executive Chung Yong-jin, who is Lee Kun-hee’s nephew, is another chaebol kid who is preparing to replace his parent’s generation.

Chung was appointed to his current post at the tail end of 2009, and in 2010 the group’s overall sales rose 14.3 percent from the previous year to 14.56 trillion won. Over the same period, the conglomerate’s operating profits rose 8 percent to 992.7 billion won.

Chung has implemented measures to improve the working conditions for female employees such as increasing child care facilities. In addition, the group’s welfare policies once again made headlines in April when Chung announced that the group will provide financial support for educating the children of former executives and employees for up to 10 years.