North Korea is a country that has been almost entirely isolated from news around the world for the past 60 years. The regime in Pyongyang allows Internet access to only a fraction of government officials and its power elite as it prepares for a third-generation hereditary succession to a young man in his late 20s.

The people of North Korea have been brainwashed since childhood to pay respect to the country’s idolized “Great Leader” Kim Il-sung and his son “Dear Leader” Jong-il.

So was Kim Hung-kwang until he began watching South Korean movies and drama in 1995.

“Toddlers are taught by their parents to say ‘thank you, Dear Leader’ before every meal,” Kim said in an interview with The Korea Herald.

“I had been a brainwashed, proud member of the (North Korean Workers’) party myself, until I came across South Korean films in 1995 and eventually learned that the outside world was much better.”

The computer engineering professor managed to flee the North seven years later and arrived in the South in 2003. He was joined by his family two years later.

Born in the eastern coastal city of Hamheung in 1960, Kim graduated from Kim Chaek University of Technology in Pyongyang, meaning he had been one of the North Korean regime’s highly trusted party members. While working as a professor of computer engineering at the Communist University, he was caught for lending some CDs containing South Korean drama to a friend and was sent to a collective farm as punishment.

This prompted him to defect to the South via China in 2003.

In 2008, he launched North Korea Intellectuals Solidarity with about 300 professors, engineers, doctors, journalists and writers from the North.

Now, he runs a dormitory and school for children of fellow defectors from the North, an Internet broadcasting station and publishes a periodical of articles by his colleagues.

The NK Intellectuals Solidarity is also a well-known source of breaking news from the North such as the currency denomination measure in late 2008 thanks to its informants around the China-North Korea border areas.

About 3,000 mobile phones are believed to be secretly used in the North for business purposes or delivering local information across the border, according to Kim.

“About 10 of them are ours, through which we hear about what’s going on there from our informants,” he said.

The informants in the North face the danger of getting caught by the authorities while speaking on the phone near the Tumen and Yalu Rivers with their co-workers in China.

One of Kim’s informants was caught two years ago on charges of spying and was tortured to death.

“She was a mother of three in her 30s who told us things like how the locals perceive the latest economic policies, but (the North Korean authorities) branded her as a spy,” Kim said. 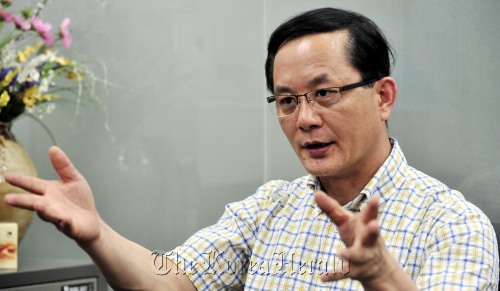 Kim Hung-kwang, president of North Korea Intellectuals Solidarity, speaks at his office in Seoul. (Kim Myung-sub/The Korea Herald)
“(Her death) was traumatizing and made us question if we should keep doing this. But we decided not to stop because otherwise, we wouldn’t be able to know about the inhumane crimes committed in the North.”

Kim’s solidarity has also sent in about 300 USBs technically modified to avoid detection.

The USBs do not contain any propaganda, but information on “what the defectors found surprising in the South,” dozens of new media programs such as PDF viewer, MP3 player software and e-books to enable more North Koreans to view South Korean video and text files, Kim said.

“Contrary to what we had expected, copies of Wikipedia entries turned out to be the most popular (among the North Koreans),” he said.

Currently, only five homepage servers are registered under the North Korean domain (.kr). The country connected itself to the Internet in mid-August, but only a handful of selected people are believed to have access to the Web.

Over 20,000 North Koreans have defected to the South since the Korean War ended in a truce in 1953. Hundreds are entering the South each month now mostly via China.

“Women used to take up about 80 percent (of the defectors) before, but lately the percentage of men is going up.”

The North still maintains tight vigilance along its borders, but an increasing number of people manage to avoid the authorities’ eyes mainly thanks to bribery.

“Nowadays, it costs between 3.5 and 4 million won to bribe a single person (a soldier along the border, for example) in order to cross the border. The price goes up as (the North) tightens borderline vigilance,” Kim said.

About the North Korean people’s consciousness that they were being mistreated by the dynastical regime in Pyongyang, Kim said it was still in a “germinal stage.”

Pyongyang has tried to soothe its starving people by promising that food supply will be normalized next year, the deadline Pyongyang has set to become a “strong and prosperous nation.”

“But if the food conditions do not improve next year and turns out that it was all words and no action, people will really turn their backs against the government,” Kim said.

“They will know for sure that they are merely being used by the government. They will think that an individual’s basic rights should be placed above their government and start thinking about why there is such a major gap between what the current regime says and the reality.”

The North Koreans are now starting to learn about the need for a social safety net and how the South Korean society is going about its welfare policies through the limited information they receive from outside, Kim said.

“The third stage will be discussing what they have learned among themselves,” he said.

“Starting from groups of two or three people, the discussions will expand and eventually allow certain groups to take action.”

South Korea has reportedly been making contingency plans for various scenarios including a “sudden change” in the North such as the collapse of the Kim regime that will lead to a massive movement of refugees across the inter-Korean border.

“In case of a sudden change, the South can run a buffer zone just south of the border to temporarily house the refugees and prepare them for life in the South, although blocking the people’s free travel would be another issue,” Kim said.

“But because it would be a temporary measure, I don’t think we need to worry too much about a mass influx of refugees.’

Kim also noted that while preparing for a sudden change or unification, South Koreans should not underestimate the North.

“The South has no nuclear weapons, no inter-continental ballistic missiles, no cyber warfare troops, and most important of all, it suffers from internal conflict,” he said, mentioning an online survey last year that showed that some South Koreans did not trust their own government’s conclusion that the North torpedoed the Cheonan.

Kim said the North was training some 3,000 hackers to attack the IT systems of major South Korean institutions.

The prosecution concluded last month that North Korea was behind the cyber attack that paralyzed the banking system of the National Agricultural Cooperative Federation, or Nonghyup, in April.

“Our website was attacked in the same way they attacked Nonghyup,” Kim said.

“The North is very good at stirring up social conflict in the South, prompting certain pro-North groups to call on the government to ‘appease the North,’ or send money to Pyongyang. Their aim is to set up a pro-North regime in the South,” Kim said.

As for the “pro-North people” in the South, Kim said they seemed to hold an illusion that the North Korean system might settle their personal grudges or social problems in the South despite the fact that the Kim regime’s ideology has failed in reality.

Kim called on the South Korean government to set up a clear set of rules and conditions regarding the extent of humanitarian aid the South can send to the North in cases of natural disasters, for example, so that emergency aid to the North becomes more transparent.