Samsung Group has replaced its top auditing and human resources managers, signaling that a conglomerate-wide shakeup may take place soon.

Samsung said it named Chung Hyun-ho as the new head of the business examination team, which oversees audits, and Chung Keum-yong as the chief of human resource support.

The replacement of the company’s high-ranking officials comes after chairman Lee Kun-hee said last week the company needed to beef up auditing to root out corruption and other irregularities. 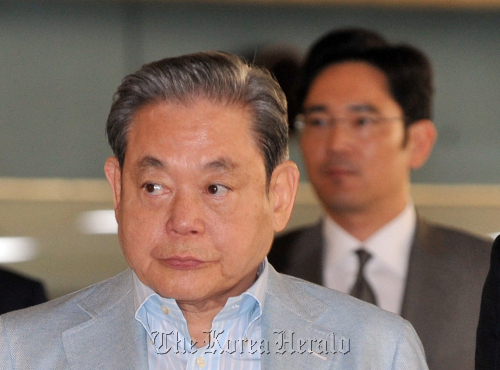 Samsung Electronics chairman Lee Kun-hee arrives at Gimpo Airport for a trip to Japan on Wednesday. Behnind him is his son Jae-yong, who is president of the electronics giant. (Park Hae-mook/The Korea Herald)
Following the latest corruption scandal at a Samsung affiliate, Lee also said it seemed as of corruption is prevalent in all parts of Samsung, leading its employees to brace for a company-wide crackdown.

“Executive vice president Chung Yoo-sung, who was in charge of corporate culture duties and Lee Young-ho, senior vice president responsible for economic check-up, including auditing, offered to resign and the requests were accepted,” Rhee In-yong, chief communications officer at Samsung Group, told reporters. “Chairman Lee reprimanded company officials, noting the clean corporate culture has been damaged and the heads of the teams related to the matter took responsibility to step down.”

The two officials who resigned from their positions at the group will return to the group’s flagship electronics arm to take new seats, according to company officials.

An unnamed official at a Samsung affiliate used fake documents in the names of foreign companies and lawmakers to get gift cards worth 6.5 billion won from Samsung Card. Then the unnamed official changed part of it into cash and used it. It was later known that Samsung Card was examined by the group over the case.

Earlier this month, Oh Chang-suk, the chief executive officer of Samsung Techwin, which focuses on security-related equipment, energy development and defense, also stepped down over a corruption scandal.

Although Oh was reported not to be directly involved, he stepped down to take responsibility for the irregularities. Details of the issue were not released.

The case was the first time in four years that a Samsung CEO resigned due to committing irregularities.

The last time a Samsung CEO stepped down was in 2007 when an employee at S1, a security service provider, burgled a client’s home.