[ The Korea Herald – Send E-mail ]
Capital to flow into emerging markets: Rubin
By 김주연
Published : Jun 15, 2011 - 18:50
Updated : Jun 15, 2011 - 18:50
Emerging markets will experience continued capital inflow into the region regardless of the expiration of the second round of quantitative easing in the U.S., Robert Rubin, former secretary of the U.S. treasury said in Seoul on Wednesday.

“There is a tremendously strong orientation now toward emerging market countries in the investment world. And that has nothing to do with the end of QE2,” Rubin said in a news conference at the Shilla Hotel. 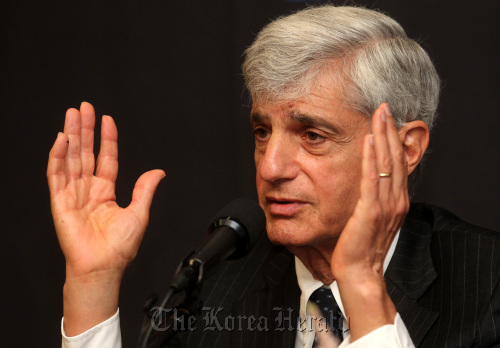 Robert Rubin, former Secretary of the U.S. Treasury speaks at a press conference at a global strategy forum in Seoul on Wednesday. (Edaily)
“Investment portfolio inflow into emerging economy is going to be substantial because this is where the growth perception is the strongest,” the pro-market economist of the Clinton administration said.

The $600 billion of quantitative easing launched by the U.S. Federal Reserve, designed to trigger growth by making cheap funds available, is scheduled to end at the end of this month.

The Fed’s decision to keep short-term interest rates at near zero with massive bond purchases drives capital into emerging markets where yields are higher.

The expiration of the bond buying program is widely known to gradually reduce the inflow of hot money into emerging markets.

“The expiration of QE2 won’t affect much of international money flows,” he added.

Rubin said the post is likely especially as French Finance Minister Christine Lagarde is gaining momentum in her race for the IMF’s top job.

“Rubin asked Minister Bahk to show his support for Lipton, describing him as a highly competent public servant, as he is likely to take the post under U.S. support of Lagarde for the IMF’s top job,” said Bang Moon-kyu, spokesman of the Finance Ministry.

Mindful of the ongoing European debt crisis, Rubin cited Greece’s de facto fiscal status of bankruptcy as a serious matter dragging the world economy. Credit rating agency Standard & Poor’s downgraded Greece’s sovereign rating to “CCC” on Monday, placing its ability to pay debt below that of Pakistan and Ecuador, which have been shut out of international markets since defaulting in 2009. The IMF and European Central Bank are currently discussing the next step to deal with Greece on top of the first rescue package of about 110 billion euros ($158 billion).