[ The Korea Herald – Send E-mail ]
Finance Ministry, BOK agree on policy coordination
By 최희석
Published : Jun 15, 2011 - 19:18
Updated : Jun 15, 2011 - 19:18
The Bank of Korea and the Ministry of Strategy and Finance will increase policy coordination as they work to minimize the effect of uncertainties in domestic and international economic conditions.

The measures were announced in a joint statement released by the central bank and the ministry following an early morning meeting between Bank of Korea Governor Kim Choong-soo and Finance Minister Bahk Jae-wan on Wednesday.

“As uncertainties in internal and external economic factors, and in the financial market persist, the Bank of Korea and the government will strengthen policy coordination through sharing data and exchanging views on the economic conditions,” the central bank and the ministry said in a joint statement. 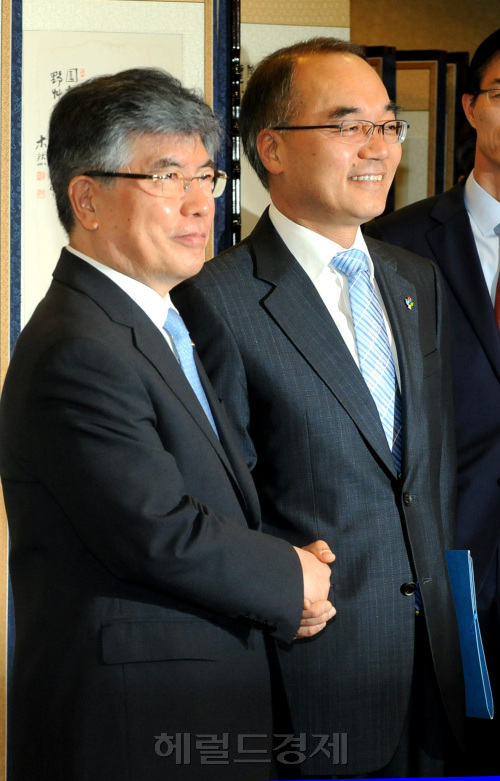 Bank of Korea Gov. Kim Choong-soo (left) and Finance Minister Bahk Jae-wan shake hands at their meeting in Seoul on Wednesday. (Park Hyun-koo/The Korea Herald)
The statement also showed that the Bank of Korea and the Finance Ministry will hold working-level talks on macroeconomic policies on a monthly basis.

At the meeting, the first since Bahk took office on June 2, the two top economic policy makers also agreed that their organizations need to take an active approach to dealing with the current situation.

“They shared the view that while the country’s economy continues improving, the current situation requires active responses as uncertainties such as international raw materials costs, and the financial crisis in Europe, while domestically inflation and household debts continue to persist,” the statement said.

Regarding macroeconomic policy direction, Kim and Bahk agreed that stabilizing inflation should be prioritized, while moving in a direction that allows improvements in employment figures to continue, the statement said.