A former advertising specialist, Choe said he has been impressed by the Korean exhibition industry’s weathering of the financial storms in 2008-09.

The sector has expanded at a double-digit rate on average over the past decade, AKEI data showed. The number of tradeshows to have opened shot up to 479 last year from 221 in 2001, with the combined size of event venues growing more than 2.5 times bigger.

“The fact that the industry continued to expand even in the downturn proves impacts of exhibitions on marketing and promotion, given relatively expensive participation costs,” Choe said in an interview with The Korea Herald. 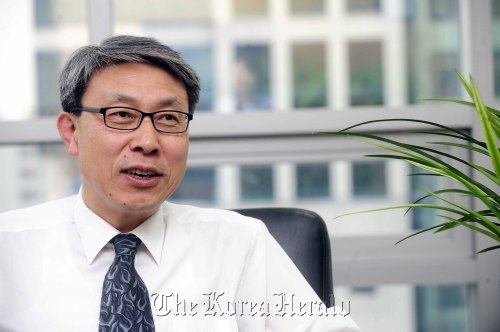 Choe Dae-kyu   (Park Hea-mook/The Korea Herald)
“Trade fairs are where you can get a grip on the latest trend in the market and meet buyers to boost sales. That’s exactly why chief executives of multinational companies including Samsung Electronics show up.”

But for a country that heavily depends on trade for its economic growth, there is still a lot more room for advancement, he added.

“On the global scene, Korea’s standing doesn’t match its economic weight. We figured it’s ranked only 25th in the world and fifth or sixth in Asia,” Choe said.

The nation’s trade dependence neared 88 percent last year, seventh-highest among OECD members, the Ministry of Strategy and Finance reported last month. Measured as the percentage of a country’s total volume of imports and exports to its gross domestic product, trade dependence indicates how much the economy’s growth relies on trade rather than domestic demand.

Along with the Knowledge Economy Ministry, the AKEI has set the goal of making Korea one of the world’s top 10 exhibition hubs in the next couple of years by scaling up, internationalizing and specializing events that are held off here.

Though the country hosts top-class international fairs for shipbuilding, food, medical equipment and others, it needs more support from industries in which Korea excels, such as information technology and electronics, he said.

“The number of foreign visitors is all that matters,” Choe said. “But before that, we have to secure new hit products, as many as possible, to unveil at the shows. It would really help if global electronics firms like Samsung and LG introduce their new phones or tablets here instead of the Consumer Electronics Show in Las Vegas or CeBIT in Germany.”

He also underscores the significance of public participation, for which the AKEI recently launched a smartphone application making it possible to search for information on exhibitions underway. More than 30,000 people have downloaded the app in a month.

The organization is now gearing up to open a forum in September in which specialists and leaders from China, Japan and Korea will discuss the development of the three countries’ tradeshow industries.

“I think the mainstay of the global markets is turning toward Asia as China’s growing purchasing power keeps generating demand,” Choe said. “We’re planning to invite ASEAN nations later on into the consultative group, hoping to create synergy among Asia’s emerging markets.”