“The work we do on accessibility is to make the information accessible to everyone ― seniors like your grandfathers and grandmothers, users who are blind and those who have hearing impairments,” said Google Inc. research scientist T.V. Raman at a press conference in Seoul.

According to figures released by the Ministry of Health, Welfare and Family Affairs, there were more than 2.5 million registered disabled people in Korea in 2010.

“Basic technology exists but making it available to everyone requires very interesting work,” he said. “Making the Web accessible is actually beneficial to a much larger percentage of users (not only to those with disabilities).” 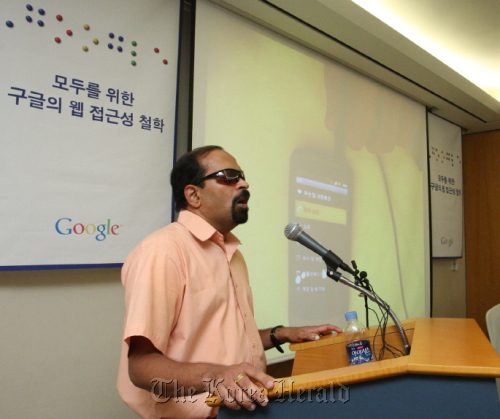 Google Inc. research scientist T.V. Raman speaks at a press conference in Seoul on Tuesday.  (Yonhap News)
As exemplary cases, Raman noted conversion from audio to text and vice versa online, as well as text captions for online media such as videos on YouTube.

Google has recognized the importance of mobile accessibility technologies by developing products such as the text-to-speech converter TalkBack, which tells the user what is happening on his or her mobile phone, and other functions like Voice Search and Voice Actions that enable them to search the Web and contact information as well as run mobile applications.

“This is the pattern with all work we do on accessibility. You need to take that information and convert it to a different format like audio to text, English to Korean and text to audio. In general, it’s about taking one form to another,” he said.

Raman, who lost his eyesight at age 14, has been working on Google’s web accessibility technology since being hired in 2005. Born in Indonesia, Raman received his master’s and doctoral degrees at Cornell University in the U.S., also writing his doctorate thesis on producing a talking book with online files.

“That is probably how I ended up doing the work on accessibility,” he said.