[ The Korea Herald – Send E-mail ]
Ji Dong-won set to become 8th Korean player in England
By 로컬편집기사
Published : Jun 13, 2011 - 17:53
Updated : Jun 13, 2011 - 18:38
It has been a tough few weeks for Korean soccer. Twelve players in the K-League have been indicted by prosecutors on suspicion of match-fixing, four teams are implicated and one entire nation is shocked. With investigations continuing, there could be more to come. It has been big news and media and fans have only the story of a move from the K-League to the English Premier League to take their minds off the scandal.

Ji Dong-won is set to become the eighth player from the Land of the Morning Calm to join the most popular sports league in the world and, perhaps even by the time you read this, the 20-year-old Jeju native should have put pen to paper to sign a contract with Sunderland, a mid-ranking team in the league coached by former Manchester United captain Steve Bruce. 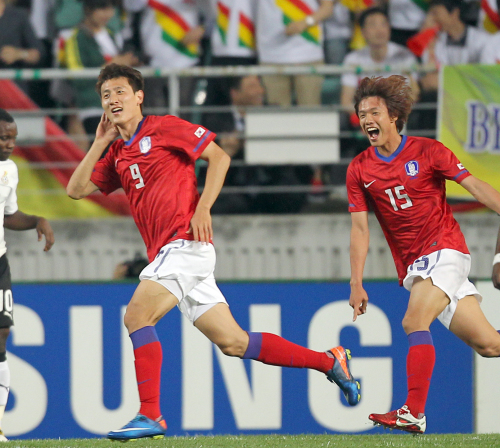 Ji Dong-won (left) celebrates after scoring against Ghana last week. (Yonhap News)
It has been a whirlwind few months for the young goal-getter who plays for the Chunnam Dragons. He only started playing for the national team on the penultimate day of the end of 2010 when he scored against Syria in a friendly. He also scored on his most recent appearance for the Taeguk Warriors in a 2-1 win over Ghana last Tuesday.

That makes it six goals in 11 games now for the player in the international arena. In between the Syria and Ghana strikes, he also impressed during January’s Asian Cup and found the net four times in the tournament. All can agree that Ji ― tall, quick and powerful ― has some developing to do, but there is no doubt about his potential.

As fate had it in the game against Ghana, the goal-scorer for Ghana was Asamoah Gyan, a striker who rose to prominence at the 2010 World Cup. After his exploits in South Africa he was soon signed by Sunderland and showed his skills in giving the Korean defense a tough time.

Gyan knows all about what it takes to move to one of the toughest leagues in the world and he thinks that Ji would be a welcome addition to the Sunderland roster.

“Ji Dong-won is an excellent player,” said Gyan after the match in reply to the inevitable barrage of questions he received from the waiting media. “He keeps the ball well, can head and is fast. If he comes to Sunderland and we play together, I am sure that we will combine well.”

They probably would though it is unlikely that Ji would be an automatic starting choice. A move to the English Premier League is always big news but some commentators in the media have argued that such a young player may be better served to stay at home for a year or so to get more playing and developmental time under his belt.

That could be especially beneficial for Ji and if he joined the military, he would get his two-year tour of duty out of the way, still be involved in regular K-League action and then be ready to head to Europe free of national responsibilities, much more experienced and still a long way from his peak.

That though would be a hard sell for a young player and not because of a rumored annual salary of $1 million. You never know when another opportunity like this may come around and given the standing that the Premier League has in Korea, it is always going to be very difficult to persuade any player to bide his time. Also in his favor is that he spent 10 months as a youth team player with Reading FC, another English club, in 2007. The cultural shock should not be too serious.

Much of the media thinks that the same could be said of the transfer fee, which is reported to be about $800,000, a disappointingly low amount for one of Asia’s top prospects.

Other Korean players who have headed to Europe recently have commanded considerably higher prices but Chunnam allowed that buyout clause to be inserted in the player’s contract. Both player and club have been surprised at how quickly the opportunity has come. It is a lesson that K-League teams will do well to heed in the future.

As Ji netted his third goal of the season for Chunnam on Saturday at Incheon United, he said that his agent and the club knew the details of his contract ― not him. He just wants to score goals.

If he can do so in England, then Sunderland has got itself a bargain while Korean soccer fans will soon forget the low price and once again enjoy watching one of their compatriots in action on Saturday evenings and Sunday mornings.