Statistics Korea said Monday that the number of baby boomers working in their 50s had exceeded the number of workers in their 30s four times since October 2009, when the older group outnumbered the younger workers for the first time. The proportion of workers in each age group is almost on par, making up 72.31 percent and 72.29 percent, respectively. Baby boomers here refer to people born between 1955 and 1963 who grew up in the aftermath of the Korean War. 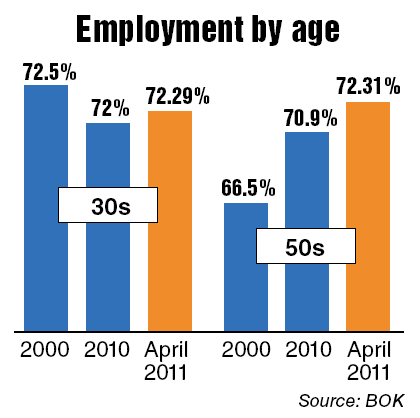 “It largely reflects demographic changes in our society. The workforce in their 50s is just as large a group as those in their 30s as they have kept their jobs from decades ago when there were plenty of jobs and opportunities available,” a Finance Ministry official said.

A report from the state agency said the number of employed people over 50 exceeded 8 million for the first time at the end of April, up 313,000 from the month before. It was the highest ever figure recorded for the age group and is more than double the level in 1991, 4.03 million. The increase highlights the smaller number of workers in their 20s as youths now make up a smaller portion of the total population.

The April figure accounted for 33 percent of the country’s total workforce, 24.3 million. Among the group, people in their fifties appeared most employable, with 5.08 million people of that age working as of April. It is an increase of more than 1.25 million from five years ago, and much higher than the 408,000 people in their sixties currently working.

“People in their 50s and 60s are also taking advantage of state-support programs designed to provide them post-retirement jobs,” he said.