With South Korea playing the role of a middleman, the Korea, China and Japan cooperative secretariat has the potential to be a global economic giant capable of wielding influence in Asia and beyond, the first secretary-general of the institution said.

“These are three already influential nations we are talking about. Can you imagine the extent of influence they will enjoy as one big group?” Secretary-General Shin Bong-kil told The Korea Herald. “Seeing these three partners coming together will give many countries a good sense of awe.”

The Trilateral Cooperation Secretariat headquarters will open in Seoul next month with Shin heading the international body for two years. Seoul, Tokyo and Beijing forged a final agreement on the establishment of the institution in December, vowing to maintain a strong partnership on economic and regional security issues over the next decade.

South Korean President Lee Myung-bak was first to propose setting up the permanent organization during a summit in Beijing in 2009, with an eye on such international bodies as the European Union or Association of Southeast Asia Nations.

As the role it played in getting all three sides to agree on setting up the body, Seoul will have to act as the mediator over various pending issues in a bid to successfully shape up the institution, the South Korean diplomat added.

“We are not only geographically located in the middle, but have always been somewhat the middleman in historical and financial issues. From here emerges our unique responsibility,” said Shin, who is scheduled to hand over his chairmanship to a Chinese or Japanese official in 2013. 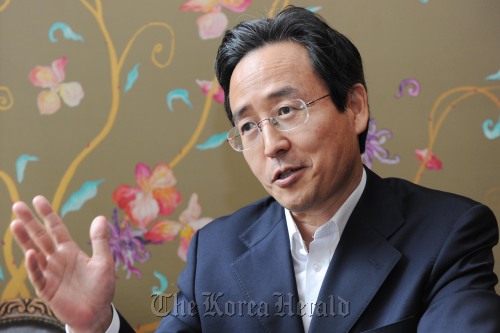 Shin Bong-kil, the first secretary-general of the Korea, China, Japan Trilateral Cooperation Secretariat, speaks during an interview. (Kim Myung-sub/The Korea Herald)
The Seoul headquarters, located near the South Korean Foreign Ministry and the Chinese and Japanese embassies, will open next month, he said.

Benchmarking the EU is “not so unrealistic,” Shin added.

“Many key international bodies also started off humbly with a few hundred staff striving to overcome conflicts and rivalries among countries,” he said.

Citing longstanding political and historical conflicts among the three neighboring countries, however, Shin noted the need of staying levelheaded through slow, humble steps.

“However big goals we may have, I believe it is also important as the first chief of the institution to take humble steps to build stable infrastructure to support bigger visions and projects,” he said.

Among others, Shin said he hopes to tackle the issue of signing a three-way free trade deal which will pave the way for “more substantial bilateral pacts” among the three partners.

“We are hoping to see some progress by the end of this year so that actual negotiations can begin next year,” he said. “South Korea’s role of mediating conflicting views among China and Japan will also be important as to this matter.”

The cooperative office will also be working on projects, including the Campus Asia Project aimed at promoting exchange programs and mobility among college students and professors of the three countries.

“By creating a so-called basket of universities taking part in the program, we will be able to produce youngsters who can work as multi-players in the future,” said Shin.

As the three countries are similar yet completely different from one another, working as one big group will be an interesting but difficult task, said Shin, who has served as Seoul’s ambassador to both China and Japan.

“Japan has a sense of maturity within itself, while China is more dynamic and ambitious. Working as a one big group, we are bound to face cultural conflicts, language barriers and various other issues,” he said.

Shin, 56, joined the Foreign Ministry in 1978 and took diplomatic training at Beijing University. He is fluent in both Japanese and Chinese thanks to nearly 10 years of experience at the Korean embassies in Tokyo and Beijing.

Shin most recently served as Ambassador for International Economic Cooperation and also served as the Foreign Ministry spokesman under U.N. Secretary-General Ban Ki-moon, who was then the minister.