The ruling Grand National Party, which had preemptively raised the issue of halving tuition, has changed its policy on how much to cut tuition by, while the main opposition Democratic Party has turned drastically toward the expansion of scholarships to differentiate itself from the GNP.

But neither party has drawn up detailed and practical policies, and the government has no plan to speak of to secure fiscal means for tuition reduction.

The GNP is pushing ahead with policies on three fronts, calling for cutting the tuition amount, expanding scholarships and improving the student loan system. Initially, the party considered offering state scholarships to the poorest 50 percent of students, but has since put more weight behind a proposal to lower the cost of school fees.

Officials say leaders seem to have a way in mind to reduce annual tuition by 10 percent each year to the 3.5 million won ($3,200) level.

Recently, floor leader Hwang Woo-yea told reporters that 1.4 trillion won could lower tuition fees by 10 percent on average, with 3 trillion won making it possible to cut the fees by 20 percent.

However, the party has not yet come up with detailed measures to realize tuition cuts.

The party policymaking committee will hold a public hearing on the issue this week to gather opinions from every level of society. Some lawmakers said that they would put forward specific measures soon but later faced in-party criticism for going out of step with the party line. Overall, party members do not seem inclined to hasten the process.

“Most lawmakers of our party seem to think that we had better collect opinions from voters sufficiently rather than disclose immature policies,” Lee Ju-young, the GNP’s chief policymaker, told the Yonhap news agency Sunday. “The GNP task force will take the central role regarding the issue.”

The party plans to finish drawing up specific steps this month in a bid to reflect tuition cuts in next year’s budget.

As for securing funds, the party has not gone beyond the basic principle of using part of the annual tax revenue surplus.

Even this matter depends on how successfully the party can persuade the government. The party finds sympathy at the Education Ministry, but is having difficulty persuading the Finance Ministry.

Since it began championing universal welfare earlier this year, the Democratic Party has called for tuition to be halved, but recently stepped up its welfare policy offensive as the GNP began to solicit working- and middle-class voters by vowing to ease the tuition burden.

The DP has attempted to differentiate itself from the GNP by announcing that it would expand the scope of the scholarships and advance the date of implementing extended scholarships.

Its original plan called for scholarships of 100 percent, 50 percent and 30 percent of tuition for poor families, depending on income.

The party had also demanded that the government lower student loan interest rates, expand scholarships to working students and put a ceiling on tuition increases.

But as students and civic groups held candlelit vigils this month, its leader Sohn Hak-kyu abruptly changed the party’s policy direction. He said on June 7 that the party would try to extend the benefits of half-tuition to include students from middle-class families. 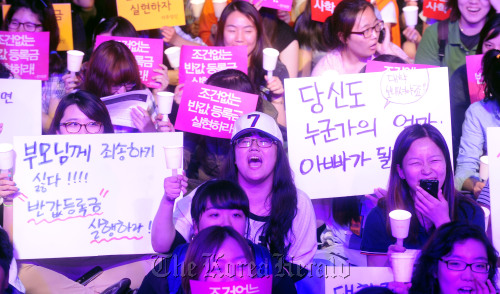 College students and citizens hold a candlelit vigil to call for the government to halve tuition fees at Cheonggye Plaza in central Seoul on Friday. (Park Hae-mook / The Korea Herald)
The party also advanced the date of implementing the half-tuition system from 2013 to next year.

Such policy modifications did not end there. The DP is reviewing a way to divert part of the budget for national and public universities to private universities.

In exchange for state support, the party seeks to make a legal system requiring private universities to use part of their cash reserves on lowering tuition. It will also push for streamlining universities.

Policy changes have brought chaos and conflict into the party.

Members of its in-house panel on tuition reduction dispute the tuition ceiling proposal. Bureaucrats-turned-lawmakers, among others, doubt whether the government can secure the financial resources for a larger tuition subsidy.

“As the main opposition party, what we should do first is to demand that the government and the ruling party keep their pledges to halve the tuition burden. It is not right to disclose our conflicting policies,” a member of the DP panel said.

The party is scheduled to call a policy meeting Monday to gather opinions from its lawmakers in a bid to unify its stance on tuition.