“When it comes to multiculturalism, people generally think of immigrant wives from Southeast Asia, but the term should be taken to a higher plane,” Rep. Kim Hye-seong told The Korea Herald.

“Not only does the term encompass a variety of groups such as foreign workers, students and refugees, but it also goes beyond the concept of just nationality or ethnicity.”

According to this definition, North Korean refugees could also be regarded as multicultural members of our society, she said.

Kim, a proportional representative of the minority Future Hope Alliance, is currently chairing the Multicultural Family Policy Forum, the first and only parliamentary body to be devoted to multicultural issues.

She is also a long-time devotee to women’s rights issues.

“I am a woman, too, and as such have suffered from disadvantages and prejudices,” she said. 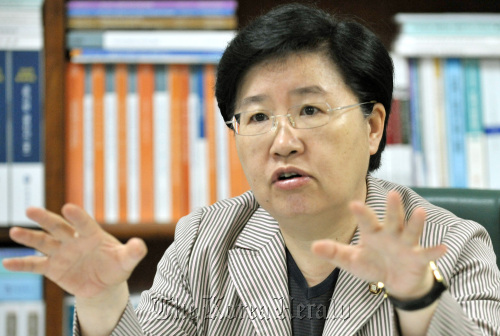 Kim Hye-Seong, a lawmaker of the Future Hope Alliance, speaks about multicultural Korea. (Yang Dong-chul/The Korea Herald)
“In my quest for policies for women, I naturally came across the issue of immigrant wives and their families, which then extended to multicultural society in general.”

The multicultural forum, which Kim currently heads, kicked off last year as the first and only parliamentary organization to study diverse issues related to the multicultural population in Korea.

“According to demographers, a society may be seen as multicultural if 10 percent or more of its population is made up of foreign-origin families,” Kim said.

“In this regard, Korea is not yet a full-fledged multicultural state but many signs in our society indicate that multiculturalism has already dawned upon us.”

The forum was thus initiated with the idea that somebody within the legislature had to pay attention to the issue and prepare for the upcoming multicultural era, she said.

“The forum is to act as a communication channel between the Korean government and the growing multicultural society here,” the lawmaker said.

“Its two major roles are to propose necessary laws and supervise the administration’s related functions.”

Despite its relatively short history, the forum is now reaching out to many local communities, the committee head said.

“It is important that all citizens, including these multicultural members, feel that they are properly represented and heard,” the lawmaker said.

The next step would be to have members of the parliament or the president’s administration from a multicultural background, she added.

“Not only would the person represent varying voices within society, but also he or she would be a role model for multicultural children.”

Along with the diversity of ethnic groups, the social consensus has been formed that multicultural policies are necessary, but opinions differ on their precise concepts and methods, according to Kim.

“Many people still regard multicultural policies as acts of moral kindness, something to be given out of good intentions,” Kim said.

“Multiculturalism, however, is a social, cultural and economic phenomenon which we have begun to understand, and it has become a priority to properly respond to it.”

Though the Joseon Dynasty is largely seen as a diplomatically exclusive era, the country experienced unprecedented prosperity under King Sejong, who opened the borders to neighboring countries and foreign merchants, she said.

“This shows how we should deal with the ever-growing multicultural population here and the related social phenomena,” Kim claimed.

Also, cultural tolerance has now become a major standard in assessing a country’s prestige in the international community, she added.

Fortunately, Korean society’s perception of multicultural families has made rapid progress, but fundamental change remains the government’s role, she said.

“Korea is now gearing up to become a multicultural society,” Kim said.

“The Defense Ministry’s recent decision to exclude ethnic expressions from its official documents is one of the positive signs.”

Of course, Korea is not alone in dealing with multiculturalism.

“Many Western countries, such as France, Germany and the United Kingdom, still experience conflicts (about immigrants),” she explained.

The seemingly endless ethnic strife is mostly because people take a defensive stance over their own culture while refusing to respect or understand those of others, Kim noted.

“Integration cannot be forced upon anybody,” she said.

The key solution is to be open to communication and remain reciprocal, Kim said.

“It is actually a matter of give-and-take. A society may ask its multicultural citizens to blend in only after it first offers its tolerance to them.”