Gangnam ― as in the area near its namesake subway station ― is not necessarily the first place that springs to mind when a foodie is out looking for a gastronomic treat.

More known for its “pojang machas” (street food stalls), karaoke and clubs, this is a spot famed for attracting night owls eager to socialize, de-stress and have fun.

Thanks to its reputation, some may be quick to dismiss Gangnam as a no-man’s land for gourmands.

Nothing could be further from the truth.

Here are three delicious and affordable eats, all within walking distance from Gangnam Station.

Owner Bob Kim, 36, fell in love with the tacos he enjoyed in Mexico and decided he had to bring them to Seoul.

He found chef Oscar Martinez Moreno, 32, and a small four table space in the backstreets of Gangnam. 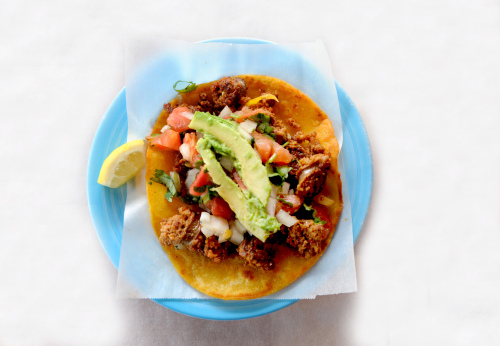 Taco Rico’s taco de chorizo features crumbly homemade sausage topped with onions,tomatoes, cilantro and avocado on a handmade corn tortilla. Squeeze a little lemon juice over it for some perk and douse with salsa verde or salsa roja for that extra oomph. (Kim In-su/The Korea Herald)
Taco Rico was born.

“About a year and a half has passed since we opened,” said Kim.

In the open kitchen, Moreno bustles about, laying out handmade chorizo on the griddle, heating up tortillas and then piling them with the smoky, crumbly meat, onions, tomatoes, cilantro and a couple of slices of avocado.

It looks deceptively simple, but it isn’t. The salsa, the chorizo, the drinks and the taco tortillas (not the ones used for burritos, quesadillas and flautas) are made on the premises, before customers arrive, pull up a chair, and dig in.

Taco Rico’s thick tortillas are made from domestic corn flour. Grainy and rich, they do not get soggy fast.

“We just use corn and water,” said Moreno.

“And salt to make the dough,” part-time employee Kim Young-taek, 25, added before explaining how they use a tortilla press to do everything by hand.

Moreno, who hails from Mexico and has 20 years of experience under his belt, also makes tongue-numbing salsas, both red and green, from chili peppers, onions and garlic. Avocado gives his salsa verde its telltale green hue.

Drinks meant to be enjoyed with tacos are also made in-house. Horchata, a rice drink, is spiced with cinnamon and tastes like a milky punch. Jamaica, made from hibiscus petals, tastes like fruity iced tea.

To get there take Exit 7 of Gangnam Subway Station Line 2. Walk straight and turn right into the street between Tous Les Jours and Paris Baguette. Walk several blocks to the end of the road. Turn right.

“When I was young, during the winter we would bake dumplings in the briquette fireplace and eat them warm,” Yu said.

The skin is bready, with a golden crust, and the fillings are mild, best paired with the pickled radish and peppers that accompany them.

Other specialties include pan-fried leek dumplings. Dried shrimp adds just the right amount of saltiness to the chewy, flattened crescents.

To get there take Exit 1 of Gangnam Subway Station Line 2. Walk straight and turn right at Cambridge Members. Walk several blocks. Zhiwei is on the left. 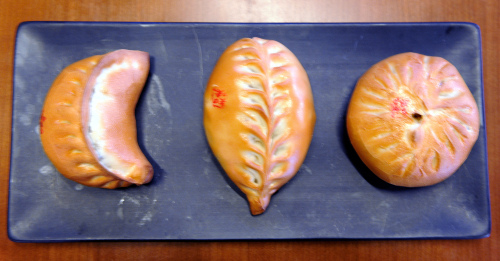 The newly-minted Bakersfield, opened by chef Moon Hong-nam and a co-owner in February, is a welcome addition to the growing number of establishments specializing in bread crafted with organic flour and natural starters.

Owner-chef Moon, 38, revealed that they use rye sourdough starter and a mixture of French T55 flour and organic Canadian flour to make their European-style, naturally-fermented bread.

Bakersfield’s main draw is that fresh bread is baked between the hours of 10 a.m. to noon and 4 p.m. to 6 p.m. allowing customers to snap up freshly-baked ciabatta, baguettes and pain au levain.

After all, what is better than warm bread, moist and airy on the inside, crackly and toasty on the outside?

Loaves encrusted with black olives beg to be dipped into balsamic vinegar; fluffy, white toast to be smothered in butter and jam.

Around 13 varieties of bread are sold, along with sandwiches and paninis.

To get there take Exit 7 of Gangnam Subway Station Line 2. Walk straight and turn right into the street between Tous Les Jours and Paris Baguette. Walk a little over a block. Bakersfield is on the left.