MANILA (AFP) – Laughing cicadas and small "cat sharks" are among scores of species believed new to science discovered by US and Filipino researchers in waters and islands of the Philippines, the team said Wednesday. 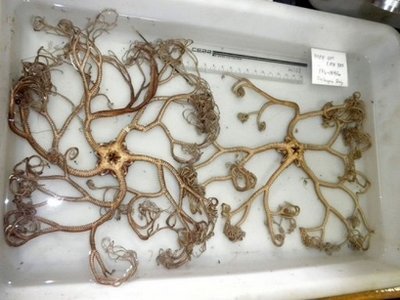 The team found a rich harvest of starfish, sea urchins, eels and barnacles, many of which had not been previously documented by scientists, said Richard Mooi, one of the California marine scientists.

"We found at least 75 new species, perhaps more. A lot more analysis is needed," he told a forum to announce the discoveries.

Fellow academy scientist John McCosker said they discovered several small "cat sharks" with brown backs and having dark stripes and white bellies, colours which he had never seen on any other shark before.

Picked up by a trawler net 2,000 metres (6,600 feet) below the waves, the sharks are about 60 centimetres (two feet) long and feed on shrimp, said McCosker, head of the aquatic biology department.

Among the other unusual discoveries, Filipino entomologist Ireneo Lit said his team believed they had found several new species, including a cicada that made a sound like high-pitched laughter.

"The local residents were afraid of them. They thought the laughter was from dwarves, laughing dwarves," he told AFP of the insect found on 2,158-metre Mount Banahaw, a volcano on the main island of Luzon.

Lit, director of a national history museum at the University of the Philippines, said he would contact a colleague in France's Paris Museum of Natural History to confirm if it was a new species.

The expedition had trawled the depths of the waters off Batangas province and Taal Lake south of Manila.

It also took samples of fauna from Banahaw and other mountains on Luzon, where the scientists found three possible new species of spiders, said American spider expert Charles Griswold.

It would take several months of laboratory work to confirm if the finds were all truly new species but the large number of experts involved could easily tell if they had really found something new, Mooi said.

Edgardo Gomez, a professor of the University of the Philippines' Marine Science Institute, said some of the marine finds would have been under threat of extinction.

"Philippine marine biodiversity is under siege," Gomez told the forum.

He cited damage caused both by pollution and overfishing and climate change.

Theresa Mundita Lim, head of the environment ministry's Protected Areas and Wildlife Bureau, warned some species could become extinct before they are even documented.

"The research on biodiversity is not at pace with the threats. The threats are more numerous," she added.