[ The Korea Herald – Send E-mail ]
Ji rises to occasion against Ghana
By 로컬편집기사
Published : Jun 8, 2011 - 18:04
Updated : Jun 8, 2011 - 19:22
He finally seems happy. For manager Cho Kwang-rae, one of the biggest tasks has been how to fill the void left by Park Ji-sung of Manchester United. The indispensable midfielder retired from the national team earlier this year to focus on playing for his club.

Cho was not content with several players he had tested. But on Tuesday night, the hard-nosed manager finally found the right man ― forward Ji Dong-won.

Ji struck an opener and set up another goal to give the team a dramatic 2-1 win over Ghana in a friendly at the Jeonju World Cup Stadium. 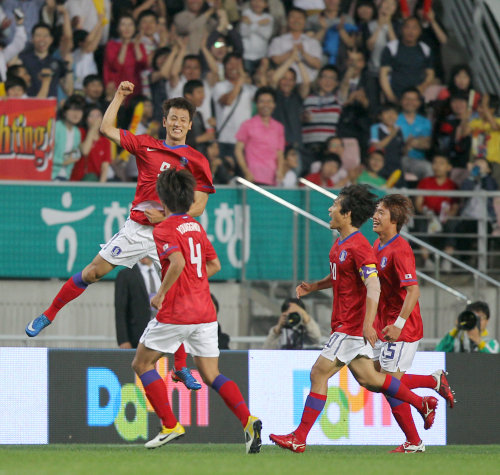 “He can play well in various positions, up front or left wing. I believe he can bring something to our team,” Cho said after the match.

On Tuesday, the manager employed the Chunam Dragons striker as a left winger to fill the void left by Park. He was given a mission to support lone striker Park Chu-young along with right winger Lee Chung-yong. And the mission was completed perfectly.

The 187cm-tall forward Ji scored just 10 minutes into the first half, rising above two defenders to head the ball past the goal keeper.

Ghana did not give up and grabbed a deserved equalizer after 65 minutes. But, again the 20-year-old made a brilliant header, forcing a fine save from the keeper, and substitute Koo Ja-cheol slotted the rebound into the open net in the dying seconds of the game.

Ji first came under the spotlight during the 2011 Asian Cup in January, in which he scored four goals.

He has recently been linked with a move to the English Premier League. Sunderland are reportedly keen on signing with the young rising star. Manager Cho said that he believes Ji could be a great success in Europe.

“He is tall, but also fast and smart. I think he can play really well in Europe if he can add some more power,” Cho said.

Ji is now expected to compete for the 2014 World Cup qualifiers as well as the London 2012 qualifiers for the U23 team.