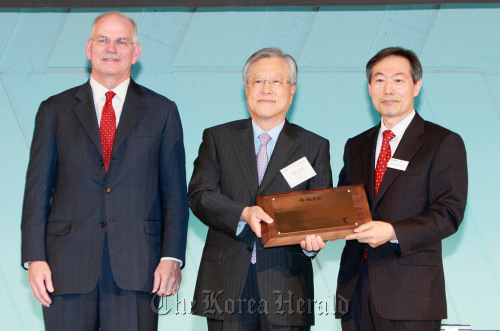 KT chairman Lee Suk-chae (center) receives the IEEE Distinguished Industry Leader Award in Kyoto on Tuesday. At right is IEEE fellow Lee Byung-ki and at left is head judge Vincent Poor. (KT Corp.)
KT chairman Lee Suk-chae received the IEEE Distinguished Industry Leader Award on Tuesday, which is considered to be one of the most prestigious awards in the field of information and technology.

Given by the Communication Society, affiliated with the Institute of Electrical and Electronics Engineers, since 2001, Lee was noted for transforming KT into a convergence firm of fixed-line and wireless communications services, according to KT officials.

He was also recognized for entering the overseas telecommunications market by cooperating with globally well-known telecoms and introducing an open system to co-prosper with smaller firms.

“When I was seated as KT chairman, they said there was no hope for further progress in the IT field, but the innovative measures provided by KT over the past two years have given a great number of opportunities in the Korean IT industry,” Lee said in the award ceremony held in Kyoto on Tuesday. “KT will continuously take the lead in making such transformations to make its position as a mecca in the global IT industry.”