With Apple Inc. officially announcing its dive into cloud computing, many local players believe the field is likely to become the next hottest trend of the mobile Internet era.

Cloud computing technology enables people to access data and software, which are stored on servers and devices, through the Internet, making the information available whenever they have an online connection.

Industry giants in the mobile and online content businesses in the U.S., such as Google, Microsoft and Amazon.com have already joined the race to get a bigger slice of the cloud computing pie, with strong rival Apple making its participation official on Tuesday.

Jobs said it would let users move their digital life from personal computer hard drives to remote data centers in the cloud in his second public appearance this year. This indicates that people could access their data from any Apple device. 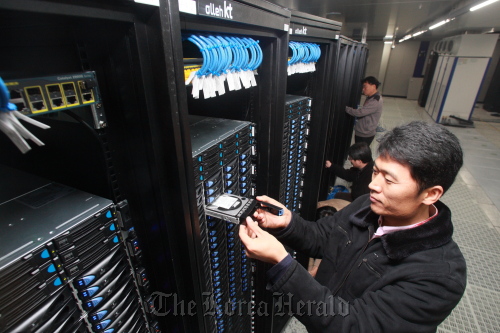 An employee at KT Corp. checks the server located inside the company’s Cloud Data Center in Cheonan. (KT Corp)
“Everything happens automatically and there’s nothing new to learn. It just all works,” he said.

It is expected to have 5 gigabytes of free storage space and unlimited space for purchased apps, books and photos.

Local players KT Corp. and LG CNS have also paid attention to the cloud computing technology, claiming it will become the next key industrial trend.

According to the Korea Institute of Science and Technology Information, the local cloud computing market is projected to record doubled growth in the next three years, from 1.3 trillion ($1.2 billion) in 2011 to 2.5 trillion won in 2014. The overseas market is also estimated to grow to $343.4 billion in 2014, from $152.4 billion, an increase of 34 percent every year, it said.

In another recent survey called “Global CIO Study,” conducted by IBM, six out of every 10 chief information officers said they were planning to introduce cloud computing within the next five years. It was also found that 70 percent of Korean CIOs listed the implementation of cloud computing as a top priority.

KT, the country’s largest fixed-line service operator, is among the Seoul-based firms that looked closely into the technology, applying the concept to its network for faster 3G telecommunication services.

“What KT is tasked with is maintaining and developing the fixed-line and wireless networks to match global standards and back it up with cloud computing,” said KT chairman Lee Suk-chae in a press conference held last month to celebrate the second year of its merger with KTF. “I believe, cloud computing is an important tool for the international stage.”

The company formed a head office for cloud computing under Lee’s orders in April last year and began releasing public cloud services for businesses such as “ucloud cs” and “ucloud cdn.” 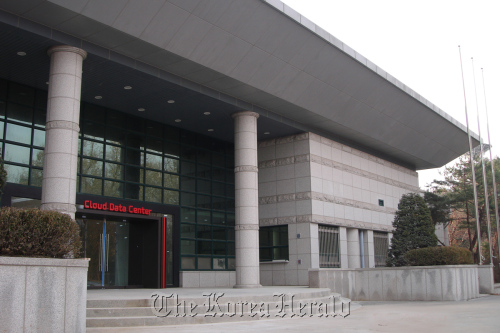 KT’s Cloud Data Center in Cheonan, South Chungcheong Province. (KT Corp)
KT plans to invest 200 billion won this year to upgrade the facilities at Cheonan CDC to successfully complete their transformation into a cloud computing-based system, according to KT officials.

In a related move, it will soon launch an optimized platform that provides cloud computing services, officials added.

“The biggest reason behind our interest in cloud computing is the escalating use of data. It’s not only happening in Korea, but data explosion is occurring all over the world,” said Suh Jung-sik, senior vice president of cloud service business unit at KT. “We’re considering this to be an opportunity for us to get going on cloud computing.”

LG CNS is another company that has put its focus on cloud computing for business customers since 2006. It was also a pioneer in the field that adopted utility computing, which enables people to pay for as much as they have used, earlier in 2002.

As the company has divided its business into public and private cloud computing services, it offers counseling on building and operating a private cloud environment for private firms and also a public cloud service for LG affiliates and small and mid-sized firms.

The Seoul-based firm was also the first to unveil the desktop cloud service to the market in February this year.

This virtual desktop infrastructure service, tested by its own 1,500 workers, allowed them to proceed with their duties by accessing data saved or downloaded on their virtual desktops with their own netbooks, tablet PCs and smartphones, said LG CNS officials, adding that it prevents the loss or leak of data.

Similar to KT, it also opened a Mobile Cloud Center in the Sangam IT Center in late April last year as LG CNS chief Kim Dae-hoon expressed his belief that mobile, smart and cloud computing will become the main key words in the digital convergence era.