[ The Korea Herald – Send E-mail ]
Three-way ties can create level playing field
By 김지현
Published : Jun 6, 2011 - 19:11
Updated : Jun 6, 2011 - 19:11
A tripartite tie-up between multinational companies, conglomerates and small- and mid-sized firms is one way the Korean government can attempt to cope with the daunting task of leveling the corporate playfield, says the head of the Korean CEO’s Association of Multinational Corporations.

“We may have the drive and means for helping these small- and mid-sized companies, but it can’t be done without a strategy,” Lee Haeng-hee told The Korea Herald. 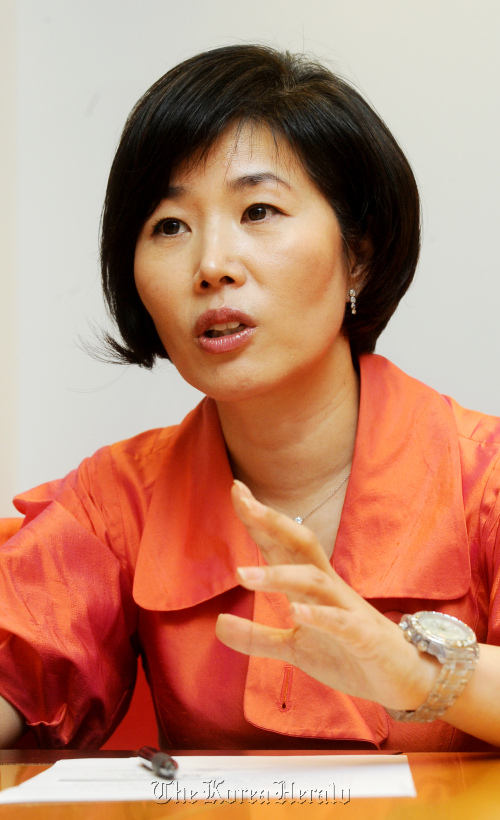 Lee Haeng-hee
Together with the multinational companies, the conglomerates can help provide the necessary technology support to these smaller firms, she said.

Bigger and more lucrative local companies are usually “encouraged” to financially support their smaller counterparts under the government campaign for “creating equal opportunities for everyone.”

“Corporate Korea” accepted the need for such a system, but there are lingering concerns about disadvantaging the bigger players.

Herself a corporate chief executive, Lee was aware of the worries.

She has been CEO of Corning Korea, a leading manufacturer of specialized glass and ceramic materials, for eight years and is recognized as one of the most influential businesswomen in the industry.

Lee was elected earlier this year to head the CEO’s association, an organization representing the spiraling number of multinational companies in Korea.

Lee was the first female to chair, and also the youngest.

The group has 140 members, many of whom were with the association when it was launched more than 20 years ago as multinational companies started to take root, lured by the country’s strong industrial drive and skilled human resources.

But there is still a lot more work to be done before South Korea can be recognized as a truly global workplace.

“The hardware for global practices seems to be in place, but the software is not,” Lee said.

She recalled instances where she cringed when meeting executives at local companies, not so much because of their lack of global business manners, but because they refuse to come out of their comfort zones.

“For instance, negotiations with global corporations require much compromise, but many Korean businesspeople still tend to just bulldoze ahead as they tend to do with their Korean counterparts,” Lee said.

She stressed that the local firms and their leaders must realize they represent not only themselves and their companies, but also the country.

Addressing the lingering hostility toward foreign companies and their Korean staff, Lee pointed out that the multinational community has done its part by sharing expertise and insight.

She also noted that government red tape is still a big hurdle foreign companies are forced to mount when working here, recalling instances when permits or authorizations were handed out after unnecessarily lengthy procedures.

As a leader at a multinational firm, Lee said she feels both pressure and pride.

“The pressure is that we face challenges due to misconceptions about who we are and what we do, but the pride is that we are mediators between these companies and our country,” she said.

As for the key to her career success, the CEO looked back on her 20-year career path that had been solely devoted to the industry she is in now.

“Be professional and walk the path you are walking with pride and without looking sideways,” Lee advised.