Based on its experience of developing into one of the world’s largest economies from one of the poorest countries in five decades, South Korea is ready to create a shift in the international aid and development assistance paradigm, the chief of the state-run international volunteers’ group here said.

“We must admit that not much has changed in impoverished nations, although the world’s advanced countries have been assisting them for more than 50 years,” Park Dae-won, president of the Korea International Cooperation Agency, told The Korea Herald. 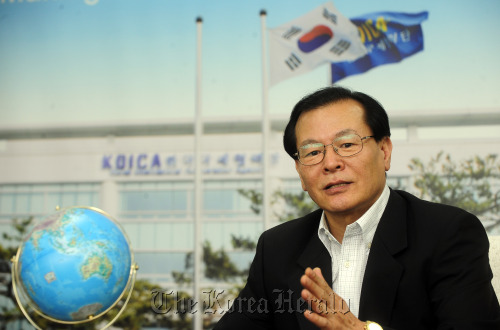 President of the Korea International Cooperation Agency Park Dae-won speaks in a recent interview with The Korea Herald. (Park Hae-mook/The Korea Herald)
“This is largely due to the fact that these advanced countries don’t really have a first-hand experience of becoming rich from poor in a short period like Korea,” he added. “It is time for us to reflect our unique experience in the aging guidelines for international aid.”

From Nov. 29 through Dec. 1, the fourth round of the High Level Forum on Aid Effectiveness will be held in Busan, during which KOICA hopes to add new guidelines to the existing OECD Development Assistance Committee protocol. There are currently about 80 such guidelines, many of which Park calls “unrealistic and outdated.”

At the end of the forum to be attended by more than 150 countries and 40 international aid groups, the so-called “Busan Declaration” will be adopted to promote to the world a wide range of experiences Seoul is ready to share, the KOICA president said. In the fora held in Paris and Accra, Seoul invited North Korea to the upcoming fourth international meeting.

“There are several factors we can share with the world,” said Park. “We have, for instance, the new village (Saemaeul) movement that helped increase income of farmers and fishermen, which we see as one of the most important experiences to be shared with underdeveloped countries.

“It is these people who will send their children to college, a generation that will eventually raise their country to a higher level, that’s something we experienced decades ago.”

The KOICA was founded as a government agency in 1991, to maximize the effectiveness of Korea’s grant aid programs for developing countries.

In the wake of the 1950-53 Korean War, Korea was one of the poorest countries in the world and depended on foreign aid as virtually the only source of capital. The two Koreas technically remain at war today, with the capitalist South becoming one of the world’s largest economic powerhouses while the communist North remains one of the world’s poorest and most isolated countries.

Beefing up its technology in the fields of ships, steel, automobiles, semiconductors and IT based upon years of outside assistance, South Korea created a post-war success story that led to its joining of the OECD in 1996. South Korea also became a member of the OECD Development Assistance Committee in 2009, cementing its position as “a donor nation.”

As the only country to have achieved such a rapid economic development, South Korea became a role model for many developing nations in the world in times of increasing demand from the international community for economic and technical cooperation.

In the past, development cooperation programs were focused mainly on meeting the basic human needs of poorer nations, but the focus has been shifting toward the promotion of sustainable development and the strengthening of partnerships with developing countries.

KOICA is striving to adapt to these changing trends by using its limited financial resources “effectively in areas where Korea has a comparative advantage,” Park said.

As one of such measures, the Seoul government launched the International Development Exchange Program in 1982, designed to invite foreign government officials and policymakers to participate in training courses here.

“Some 6,000 government officials from various countries visit us each year and more than 40,000 have been trained under the program,” said Park. “As incumbent officials, they directly apply what they have learned in the policies when they go back home. The results are positive images about South Korea.”

New global concerns such as the environment, poverty reduction and gender mainstreaming have been gaining significant importance in the international community, an aspect KOICA also strives to keep in mind, Park said.

“Let me talk about climate change as one example,” he said. “While helping a Southeast Asian country to improve its rice farming skills, we used to build facilities operated on oil, which is not only expensive but environmentally harmful.

“By building facilities using solar heat and other natural resources, we are not only helping this country, but are also accumulating new technologies that can later be applied to our own environmentally-friendly development models,” Park said. “This is a typical win-win strategy.”

For South Korea to carry out its new responsibilities as one of the wealthier countries in the world in a stable manner, it must foster many more experts and consultants on Official Development Assistance, Park said.

“Because we were a country receiving donations, not a donor, for so many years, we haven’t afforded to produce experts who specialize in ODA,” he said. “Despite the lack of interest in this area, the total volume of the global ODA market is some $140 billion ― a blue ocean never to be overlooked.”

As Korea is an official member of the OECD Development Assistance Committee, Seoul firms are now qualified to take part in the international bidding in the ODA market.

“We need experts for this,” Park said, adding other countries have many ODA consulting firms to work on the area.

With this goal in mind, the KOICA recently opened the country’s first ODA education center.

With its goal of becoming “a thanking nation,” South Korea prioritizes backing countries that fought on its side during the Korean War, Park said.

“Countries such as Ethiopia, the Philippines and Columbia were wealthier than us 60 years ago but are in need of our help today,” he said. “Neighboring Asian countries and newly emerging African allies are also major recipients of our aid.”

South Korea also needs to increase the total volume of its development assistance to match its economic status in the world, the KOICA president said.

The total volume of Korea’s ODA this year is estimated at 1.7 trillion won ($1.58 billion), an increase by 23 percent from the previous year. But this is still a small amount compared to other OECD Development Assistance Committee member states, according to KOICA.

Going forward, South Korea plans to expand its development cooperation by scaling up the ODA to a level commensurate with the country’s economic standing, said Park.

“In doing so, we are also striving to follow the global trend of increasing the proportion of grant aid to the less developed countries.”

Park, 64, was reappointed president of KOICA in May, becoming the first official to serve two consecutive terms at the helm of the state-run agency which was founded in 1991. He will hold his post for another three years through 2014.

Joining the Foreign Ministry in 1974, Park served as the consul-general of the Korean consulate in Toronto, Seoul’s ambassador to the People’s Democratic Republic of Algeria and various other government posts before joining the KOICA.