“The social overhead capital investments are not solely for the Expo, they were timed to coincide with the event to increase accessibility to the southern coast,” Kang said. 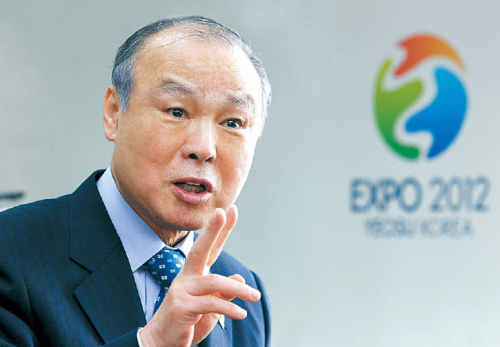 Kang Dong-suk, chairman of Organizing Committee for Expo 2012 Yeosu Korea (Yeosu Expo)
According to Kang, nearly 10 trillion won (about $9 billion) is being spent on new roads and rail connection in the under-developed South Jeolla and surrounding areas.

“Despite the southern coast having good natural resources, its development has lagged due to inaccessibility. The expo will improve accessibility, and the effects will be felt not only by Yeosu but across the coast.”

Kang emphasized that the site and buildings used for the event have also been designed maximize their utility once the three month long event is over. The Expo 2012 Yeosu Korea will be held from May 12, 2012 to Aug. 12.

“The Daejeon expo event (in 1993) was successful, but did not lead to development. Other countries also have such cases, but we have been planning from the beginning (to make Yeosu) the focus of marine leisure and research,” Kang said. He added that unlike the Daejeon event, the committee is minimizing investment into permanent structures, and that most of the permanent structures will be converted for other uses once the event is over.

“Expo buildings are designed for exhibitions, making it difficult to convert them to other uses. So we have taken such factors into account from the planning stage.”

Regarding inviting North Korea to the event, Kang said that while such a development would be desirable, political tension between the two Koreas is an obstacle.

“The North is a member of the BIE, and it is natural that they be invited, but the current South-North relations and other factors are making it difficult to push the issue,” Kang said.

“I have made the position clear when I met the North Korean representative in Paris. The expo is a government-led event but it is also an international festival, and as such the (North Korean) representative responded positively.”

He added that as with other underdeveloped countries, North Korea would be provided with up to $400,000 support to cover the cost of participating in the expo.

As such Kang said that the committee has been working with central and regional government agencies in holding events in China to attract Chinese visitors, and that similar events will be held in Japan.

Regarding Europe and other regions, Kang said that the committee has been working through a public relations agency to promote Yeosu, rather than trying to attract visitors.