“People there are loose and unpretentious and tend to enjoy talking,” says Blount of the Big Easy, which he calculates he has visited 42 times in his 63 years. “I love to be around people who like to talk picturesquely, without getting too forced about it.”

Blount (pronounced “Blunt”) is focused on New Orleans because he has just written a stylish, tangy, reminiscence-packed guidebook about it. “Feet on the Street: Rambles Around New Orleans” (Crown Journeys, $16) contains his free-associative reflections on a place he adores immoderately.

“I like to sit around a table with a few people and eat and drink and talk,” he says of his favorite New Orleans activity. “If I could do that all the time, I wouldn’t write.”

Blount contributes columns to Atlanta Magazine and Oxford American, and also writes humor books, including “Crackers” (about being a Southerner) and “It Grows on You” (about hair). He’s written the memoir “Be Sweet,” the novel “First Hubby” and the biography “Robert E. Lee.”

Blount also has written a movie, “Larger Than Life” with Bill Murray, and has appeared briefly in a few of them. If you were casting him in a film these days, you might make him a plant foreman or a wagon master or the manager of a struggling ball club. His features are unassertively flinty ― more Chris Cooper than Gary Cooper ― and his sweep of gray hair imparts an air of earned authority.

On a picture-postcard afternoon, late in April, Blount is having lunch in Central Florida, rather than in New Orleans. That night, he’ll tape a road-trip installment of the NPR news-quiz program, “Wait Wait ... Don’t Tell Me,” at the Portifino Bay Hotel at Universal Orlando Resort.

As Blount works his way through a plate of grouper, under the umbrella of an outdoor table at the hotel’s Trattoria del Porto, Carl Kasell, the show’s silver-throated announcer, drops by on his way to an afternoon of serious roller-coastering. Other droppers-by include fellow-panelist Roxanne Roberts and her adolescent son.

“Have you ever been to the real Portifino?” asks Roberts, meaning the restaurant in Italy upon which our local version is modeled.

New Orleans strikes Blount as European too ― a cross between Europe and Dixie.

Blount grew up in Decatur, Ga., and currently spends much of his time in Mill River, Mass. He first visited the Louisiana city as a child, but only began to understand the place in the summer of 1963, when he worked at the Times-Picayune after college. 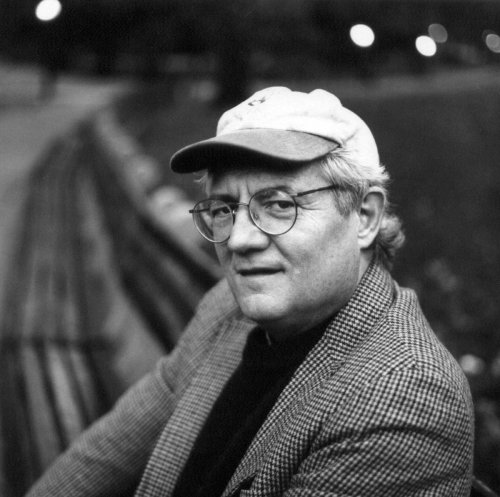 Roy Blount Jr. (MCT)
“People in New Orleans tend not to present themselves in formal ways to the world,” he reflects. “People sort of melt a bit in the heat and the moistness.”

Without provocation, Blount will run down a list of artists who, thanks to the city’s moist magic, have experienced “formative moments:” William Faulkner, Louis Armstrong (a New Orleans native), Zora Neale Hurston, Little Richard, Ray Charles and, well, it’s a very long list.

He can recommend a lot of things in the city, including The Bistro at the Hotel Maison de Ville (“where Tennessee Williams used to stay”); Audubon Zoo (“the gorilla and the orangutan”); Jackson Square (where he recently heard a man play “Malaguena” and “Summertime, Summertime” on water glasses); and the annual Jazz Fest celebration, as well as a spot called Jacques Imo’s.

“Last time I was there, the owner was drunk and standing on tables and giving out free food,” he recalls with a chuckle. “So there’s that.”

Surprisingly, the author has never been in New Orleans during Mardi Gras.

“From everything I hear, the actual Fat Tuesday day is too loud and violent,” he cautions. “I would chase one naked drunk person ― I mean, if she wanted me to chase her ― but a whole bunch of naked drunk people is just too much.”

In “Feet on the Street,” Blount calls New Orleans “the best town for eating in America, if not in the world.” And for him, oysters may be a bigger part of that than they are for most folks.

“New Orleans Directions” (Rough Guides, $10.99), a recently published no-nonsense guidebook, contains only the briefest mentions of the mollusk. (“Oysters Rockefeller (was) concocted at Antoine’s around 1900,” author Samantha Cook notes, “and named for the oil magnate.”)

In contrast, the cover of “Feet on the Street” prominently features an image of an oyster, and the book’s text is rich in references to them. Blount also includes his semi-famous song about oysters, which ends this way:

I prefer my oyster fried.

Then I’m sure my oyster’s died.

The author even compares himself to an oyster: As a young man, he reveals, he had developed a hard shell that the moistness and informality of the Big Easy helped him shed.

“It’s a metaphor,” he explains. “Oysters work on all sorts of levels in the book.”

Despite Blount’s near obsession with oysters, he is far from unimpressed by the city’s other gastronomical delights.

In “Feet on the Street,” he writes that, in New Orleans, “there is always something more to learn about what taste buds are for,” as he drools over spinach gnocchi, fried green tomatoes with remoulade sauce, tomato-and-ginger soup and even, improbably, alligator cheesecake.

“I know it sounds strange,” he has admitted, “but it is I think ... the best way in the world to get some alligator in your system.”

Nor does he neglect the city’s signature dishes, such as the beignet (“a square doughnut with no hole”), jambalaya and gumbo. And he can enthusiastically recommend the bizarre-sounding deep-fried roast-beef po-boy served at Jacques Imo’s.

“You’d think that would be awful,” he says, finishing his grouper. “But it was great!”

There’s also the muffaletta, which was invented at the city’s Central Grocery and which, Blount has pointed out, consists of “slices of several different aromatic meats and cheeses and oily-garlicky olive salad” on a “big round sesame-seed bun.”

At the mere mention of this delicacy, the author comes unglued.

But you just ate!

“Yeah, but I didn’t eat a muffaletta.”