Clutched to the elderly woman’s chest was a waterlogged, tattered copy of McDonald’s debut, “Is This a House for Hermit Crab?” The woman proceeded to tell McDonald that because of her modest means, the book, which tells the simple story of a crustacean on a quest to find the perfect home, was the only one she owned. Yet it inspired her four grandchildren to become voracious readers.

“The tears were just streaming down my face,” said McDonald, recalling the long-ago moment while taking a break from signing books and telling stories during her annual stint at the Los Angeles Times Festival of Books this spring. “That is why I do this.”

McDonald, a big kid herself who often peppers her language with words like “totally” and “no way,” graduated from the world of large-print picture books in 1998 when she invented Judy Moody, a third-grader who likes mismatched clothing, collects scabs and wants to be a doctor when she grows up. She’s a character with none of the frilly trappings that today’s 9-year-old girls are purported to adore. 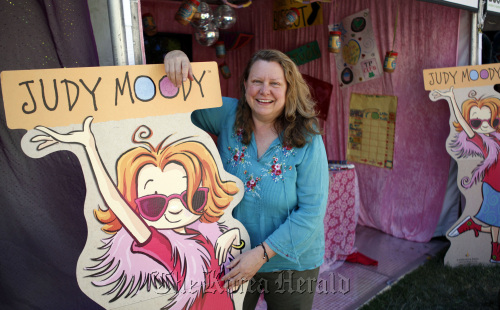 Megan McDonald, the author of the Judy Moody books and screenwriter of the upcoming movie, arrives at the Los Angeles Times Festival of Books at USC, May 1, 2011. Allen J. (Schaben/Los Angeles Times/MCT)
Still, since McDonald’s “Judy Moody” series debuted in 2000, the books have become international bestsellers with 14 million copies in print worldwide. Precocious Judy not only allowed McDonald to abandon her part-time librarian gigs for full-time writing, but she’s also become something of a superhero at elementary schools nationwide, inspiring many children deemed “reluctant readers” to pick up any one of the nine books in the collection.

“The series does a great job of captivating unmotivated readers who are making the transition into chapter books,” wrote Virginia-based reading specialist Jennifer Thompson on the website Greatschools.org.

Now Judy Moody is making her big-screen debut with the June 10 release of “Judy Moody and the Not Bummer Summer,” a film McDonald co-wrote with longtime friend Kathy Waugh. The movie stars Australian newcomer Jordana Beatty as Judy Moody and follows her summertime exploits when she and her younger brother Stink (Parris Mosteller) are left in the care of crazy Aunt Opal (Heather Graham) after her parents must travel to California to handle family matters.

Though the screenplay isn’t adapted from any of McDonald’s existing stories, it stays true to the universe McDonald created, down to the squiggle in Judy’s rug and the posters on her bedroom walls.

McDonald had been interested in putting her favorite character in movies for a long time, but it wasn’t until she met producer Sarah Siegel-Magness (“Precious: Based on the Novel ‘Push’ by Sapphire”) that she allowed her series to be optioned. Siegel-Magness had become a fan of the series through her daughter, and she wowed McDonald with her enthusiasm for the property, which Siegel-Magness said made her wax nostalgic for her own childhood.

“I loved this character from the moment I began reading it with my daughter,” said Siegel-Magness, who self-financed the less-than-$20-million movie with her husband through their Smokehouse Entertainment production company. They hope the film will perform well enough to merit a sequel.

Although Mary Pope Osborne had been filling pages of the “Magic Tree House” books since 1992 -- the same year Barbara Park’s Junie B. Jones series began engaging early readers -- those books were restricted in vocabulary and were fewer than 100 pages long. McDonald says that with “Judy Moody” she hoped to offer 7- to 10-year-olds something less structured and tonally in the vein of the “Ramona” books that Beverly Cleary wrote in the 1960s.

With the help of editor Mary Lee Donovan at Candlewick Press, McDonald came up with the idea for a lengthier book filled with line drawings and large-set typography that wouldn’t intimidate young readers.

“People were very worried about the length, but we knew that as a kid you open this book up and it’s very inviting -- it moves along quickly and you are rewarded with lots and lots of drawings,” Donovan said. “Kids were so excited to pick this up, read it and be able to say, ‘I read this chapter book all by myself, and it’s over 100 pages.‘ ”

McDonald has no children, but she said that with 35 nieces and nephews, plus the tremendous amount of mail she gets from her fans, the Pittsburgh native, who now calls Sebastopol, Calif., home, remains connected to kids.

In addition to her Judy Moody duties, McDonald also writes the Stink series. She said it’s the interaction with her fans, plus the tremendous amount of travel she does to book fairs, schools and public libraries, that keeps her current with kids’ changing tastes.

“It’s important because it reminds me what kids this age find funny, what makes them laugh, what kinds of things they are thinking about. And sometimes things we talk about wind up in a book.”