When asked why he promotes vegetarianism, Yoon Sung-chul, professor of nephrology at Dankook University Medical College, responded in Kind: “Why do you stick to eating meat?” he asked.

“I have numerous reasons why we should be vegetarians. How about you?” he said in a Korea Herald interview.

On May 21, Yoon took part in the inauguration of “Vege Doctor,” a group aimed at changing people’s eating habits based on vegetarian diets.

The meeting, which started in August last year with six doctors, now has some 200 members nationwide.

“Vegetarian doctors, who have been lonely, flocked together to share the virtues of vegetarianism among themselves and with the public,” he said. 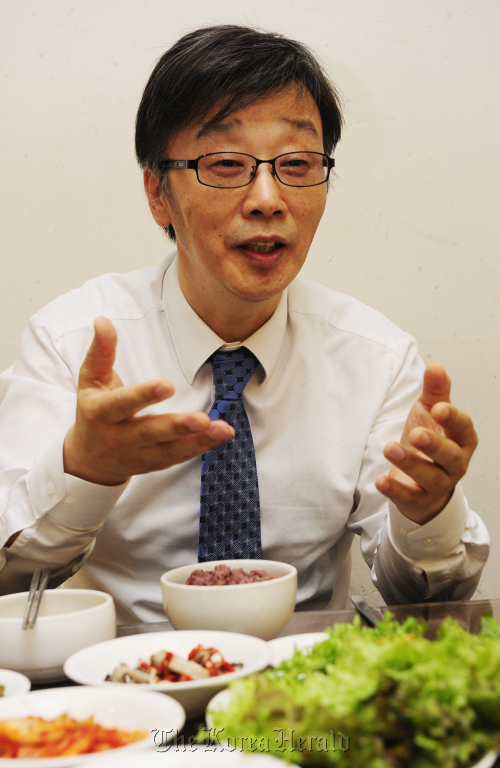 Yoon Sung-chul, a kidney specialist, speaks at a vegetarian restaurant in Insa-dong, Seoul, Tuesday. (Park Hae-mook/The Korea Herald)
Vegetarians do not eat meat, fish and poultry, while vegans abstain from eating or using all animal products, including milk, cheese and eggs.

Yoon said he is an “80-percent vegan,” sometimes compelled to eat meat in Korea as it is not always friendly to vegetarians.

Many people may “stick to” eating meat because it tastes too good to give up. But their bigger concern is a balance of nutrition. They think vegetarian diets do not contain enough calories to support growth and create energy.

Yoon, however, made it clear that vegetarian diets, if carefully planned, can meet all nutrient needs for every age group.

The key is to eat a variety of foods, including fruit, vegetables, plenty of leafy greens, whole grain products, nuts and seeds, while limiting intake of sweets and fatty foods.

The American Dietetic Association has also said that “appropriately planned vegetarian diets are healthful, are nutritionally adequate and provide health benefits in the prevention and treatment of certain diseases.”

“People may feel better when they eat high-protein foods such as samgyetang (chicken and ginseng soup). However, it is a temporary condition that occurs when the consumption of amino acids expand blood vessels. You should pay more attention to the negative effects following the intake of high-calorie foods,” he said.

He also criticized the pervasive belief in the efficacy of eggs and milk here. He said egg contains too much protein, raising cholesterol, while milk is not so helpful in providing calcium.

“Calcium is absorbed as much as we need and the leftover is excreted or forms gallstone in organs. And no one knows exactly about the origin of cows and their milk and how they are treated,” he said.

The kidney specialist said there was a time when he felt helpless as a doctor.

“After prescribing antibiotics for a patient, the next thing that I could do was just wait for the sugar level to drop. Then, I thought ‘what if the figure goes up?’” he said.

Like many other doctors, he could have increased the dose.

But he instead started studying food science and found that vegetarian diets would dramatically improve the health conditions of his patients.

“Patients just seek more medicines if their conditions get worse. Without any change in their eating habits, they are trapped in a vicious circle,” he said.

The first thing he does is turning a patient who is fed up with treatments, medicines and foods off medication, where possible. Then, he starts treatment from the beginning with detailed diet planning.

“Koreans take too many calories and medicines,” he said.

According to Yoon, many Koreans still remember the days when they were starving right after the Korean War and such experiences have continued to affect people’s over-consumption and belief in high-calorie foods.

Koreans’ average life expectancy is now 80, up 12 years over the past three decades. But during the same period, cardiovascular diseases and depression have seen 24-fold and 10-fold increases, respectively.

That indicates, Yoon said, that people live longer but they are not healthier.

Yoon and members of Vege Doctor think now is the time for the whole nation to think again about their eating habits. That’s why they want to join the government’s ongoing discussion about the nutrition of school meals.

Even though his wife is a long-time vegetarian, he has not yet succeeded in persuading his young children, who have already gotten accustomed to the taste of animal protein.

“I know the word ‘vegetarian’ sounds somewhat radical and I don’t want people to feel threatened by our campaign,” he said.

He said it is okay to make the change gradually. He advised starting with brown rice and choosing fish instead of meat.

“After two weeks, you would feel a dramatic change both in your body and mind.”