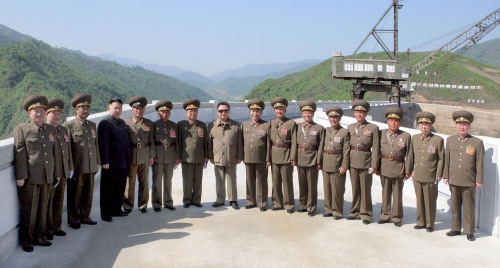 North Korean leader Kim Jong-il (eighth from left) and his son and heir apparent Jong-un (fourth from left) pose with officials during his recent visit to the Heechun Power Plant construction site in Jagang Province. (Yonhap News)
Abandoning its months-long reconciliatory gesture, North Korea threatened this week to cut off a military hotline with South Korea, a change analysts say might affect the overall mood concerning the resumption of multinational nuclear disarmament talks.

On Monday, just three days after Kim Jong-il reportedly returned home after meeting with his Chinese counterpart Hu Jintao in Beijing, North Korea said it will suspend the eastern border communication channel and warned of “physical actions” over Seoul’s propaganda campaign near their heavily fortified border.

The moves of Seoul’s Lee Myung-bak government against the North “have reached an extreme phase,” Pyongyang’s National Defense Commission said in a statement carried by the official Korean Central News Agency.

The South Korean government has been downplaying the meaning of Pyongyang’s changed attitude on the surface.

“This isn’t the first time for North Korea to apply pressure while, at the same time, saying it wants to talk,” said Lee Jong-joo, the vice-spokesperson of Seoul’s Unification Ministry.

Suspension of the eastern border military hotline will not cause a severe impact on overall inter-Korean communication as other hotlines remain open, the ministry, which handles affairs with Pyongyang, has also said.

On Wednesday, a South Korean media outlet also reported that the eastern border communication line “had already been down” since a nearby forest fire in December, citing unnamed government sources.

All communications have been made via the western border hotline since then, the sources said.

The timing of the warning, however, is “worth attention,” another ministry official said.

“If North Korea’s warning had anything to do with the summit with China, this might mean a permanent change in position that will influence the overall mood for the resumption of the denuclearization talks as well as inter-Korean dialogue,” the official said, asking not to be named due to the sensitivity of the issue.

Suffering from deepening food shortages and international isolation, North Korea has been making escalating appeals to restart the multinational denuclearization talks it walked from at the end of 2008. The six-nation talks, involving the two Koreas, China, Japan, the U.S. and Russia, had been one of Pyongyang’s sources of food.

As North Korea’s last-remaining benefactor and ally, China has been keen to have the talks resume by first getting nuclear experts of the two Koreas meet and mend ties. The North’s Kim reportedly proposed summit talks with Seoul’s Lee in late April.

South Korea, however, has been unmoving toward Pyongyang’s appeals, demanding an apology for the two deadly attacks last year that killed 50 people.

The conservative Lee government in the South has also been reluctant to send food to Pyongyang, dubious about the actual food conditions there and which sector is really getting the donated food.

“With China backing it financially and the U.S. considering resumption of aid, North Korea could turn tough and blame everything on the Lee government,” Kim Yong-hyun, a North Korean expert at Seoul’s Dongguk University said.

Although reports vary over the outcome of North Korean leader Kim’s summit with Hu in China last week, the trip was clearly made for financial purposes focused on Pyongyang-Beijing joint economic projects and food assistance.

“With confidence that China will continue to back it up, North Korea may no longer feel the need to make up with the South,” he said. “And China cannot go on asking the North to make effort when South Korea is so reluctant to mend ties.”

Seoul may have to take a diplomatic approach toward Pyongyang so as not to lose the initiative to other regional powers in the nuclear disarmament talks, the expert added.

“If Washington decides to resume the stalled food aid to the North, dialogue partners may move to resume the six-party talks regardless of our position,” he said. “To avoid this, our government needs to separate the nuclear issue with inter-Korean ties in a diplomatic and practical decision.”

A U.S. fact-finding team which has been in North Korea to examine the food conditions there discussed “monitoring terms necessary to ensure that aid would reach those for whom it’s intended,” State Department spokesman Mark Toner said in a press briefing Wednesday.

Robert King, special envoy for North Korean human rights, led a team of officials and experts to Pyongyang last week, a move analysts say may lead to Washington’s resumption of aid to the impoverished nation.

The final decision will be made after the team presents a full report, Toner said.

“Obviously we have to wait for the food assessment team to get back, and then we’ll look at (that information), and we’ll compare it to the other data that we have, before a decision’s made,” he said.