When he was growing up, death was not shocking but ordinary. He saw dead bodies in the street, people being executed in public, and people dying of hunger.

North Korean defector Kim Gyoo-min, who has been living in South Korea since 2001, is debuting as a film director with “Winter Butterfly.”

Based on a true tragic incident that Kim had encountered while he was living in North Hwanghae Province in the late 1990s, the movie tells a shockingly poignant tale of a mother and a son who suffer from severe food shortage.

“Many people have warned me about making a film about North Korea, saying it can only label me as a North Korean defector which can of course be stigmatizing,” Kim told reporters at a press conference held in Seoul on Monday.

Kim became disillusioned by the communist government while attending university and decided to leave North Korea for good in 2001. He was working for a road construction company at the time.

“I first went to China then made my way to Mongolia,” Kim said during a separate phone interview with The Korea Herald. “I was able to fly to Seoul from Mongolia.”

In the North, Kim had studied writing at school and dreamt of becoming an actor. That is why he studied theater and cinema at Hanyang University after making Seoul his second home. 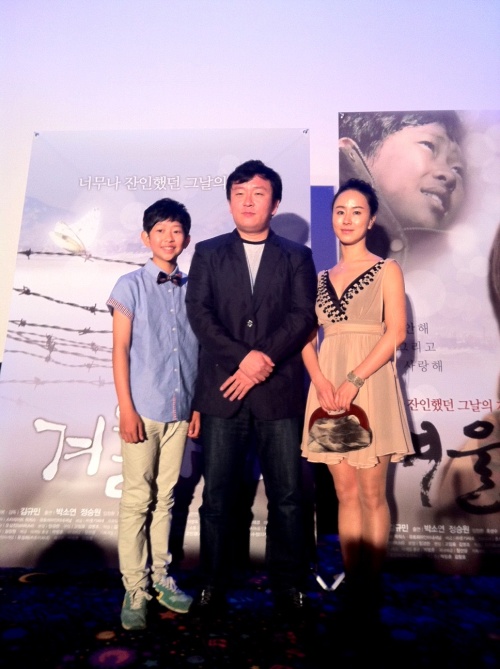 Director Kim Gyoo-min (center) poses with actress Park So-yeon (right) and actor Jeong Seung-won at a press conference for their movie “Winter Butterfly” in Seoul on Monday. (Claire Lee/The Korea Herald)
“While I was studying at Hanyang University eight years ago, I looked back and thought about the incident of the mother and the child in my hometown,” Kim said. “And I realized how shocking the incident was. When I was actually living in the North, I encountered such tragic events very frequently, so I was almost indifferent to them. But everything felt different after moving to Seoul. That was the first time I decided to make a movie about the specific incident.”

While working as a crew member, Kim was responsible for teaching the North Korean accent to the movies’ actors and actresses. But for his own movie, he decided to let his actors perform in their standard South Korean accent.

“From my own experience, performing in North Korean accent was a challenge for many actors here, and it prevented them from acting freely with their raw emotions,” Kim said. “I removed North Korean accent on purpose in the movie. I think I will do the same for my future films as well.”

Actress Park So-yeon, who played the mother in the film, performed in scenes where her character was eating dirt and drinking unclean water as she had nothing else to eat.

“I was on diet for the movie, and tried not to eat as much as possible to empathize with the character,” Park said. “But of course, there is a huge difference between not eating temporarily on purpose and having literally nothing to eat.”

The initial title of the movie was “A Mother and a Son.” But Kim changed his mind as he was finishing up editing the film. The movie’s ending is extremely shocking and tragic, especially because it is based on a true story.

“When we think of butterflies, most of us would imagine something beautiful as it searches for flowers in spring,” Kim said. “My question was, what if a butterfly was born in the winter time? Would its life be happy? In the similar context, I wondered what could’ve been different if the mother and the son were born in South Korea. So I named the movie “Winter Butterfly.”

Kim stressed that South Koreans should support the suffering North Koreans, regardless of the shared ethnicity and history between two Koreas.

“Every human being, regardless of his nationality, has a right to live in dignity,” Kim said.

“It is a dangerous idea that we should stop supporting them because most of the goods we send are distributed to authority figures and the military in the North. If that were the case, we should find an alternative way to help the civilians. If we don’t even have the very willingness to help, it would be impossible to find to support them. North Koreans are also human beings. We should not turn away from people who are suffering.”

In the movie, there is a scene where the mother burns a photograph of Kim Il-sung while cooking dog meat after killing the animal irrationally. “I did it on purpose,” Kim said. “I wanted to show how people are dying under the rule of Kim Il-sung and his son Kim Jong-il. If the scene ever becomes a problem politically, I will take responsibility for it.”