A former South Korean soldier testified for the first time Monday that from its aircraft, the U.S. military sprayed a defoliant over the Demilitarized Zone in 1955 ― more than a decade earlier than news media recently reported.

News reports have said that the U.S. military had sprayed Agent Orange south of the buffer zone dividing the two Koreas from 1968-69 to more easily detect North Korean infiltrations into the South.

Public displeasure has been mounting after former U.S. troops said they buried defoliants and other chemicals at some of the U.S. military installations in Korea, including Camp Carroll in Waegwan, North Gyeongsang Province.

“It was in 1955 when I was working at the 15th Army Division (in Cheolwon, Gangwon Province) ― one year after I joined the military. The U.S. military mobilized its choppers and other aircraft and sprayed defoliant three to four times a month over the DMZ,” Eum Do-nam, 77, told reporters. 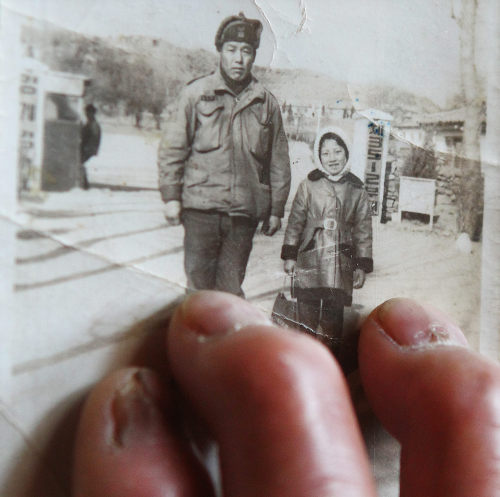 Eum Do-nam, a former South Korean soldier suffering from exposure to a defoliant, touches a photo of him and his daughter at a military base near the Demilitarized Zone in Yeoncheon, Gyeonggi Province. He claims his fingers were deformed by the chemicals. (Yonhap News)
Eum, who was discharged as master sergeant decades ago, said the U.S. military independently sprayed the toxic defoliant without South Korean troops participating.

“We were told to wear gas masks and raincoats, or take shelter as they said the chemicals falling from the U.S. aircraft were not good (for health). The plants and trees over which the aircraft flew all turned red and perished,” he said.

Eum, however, said clearing grass and trees near the DMZ, with which North Korean infiltrators hid themselves, was “very crucial” at a time when firefights between the two Koreas frequently took place near the border.

According to U.S. government documents released to media, the U.S. began research to develop defoliants during World War II.

In 1952, it developed Agent Purple and airborne equipment to spray it, intending to use them in the Korean War. News reports said the government documents show the U.S. used an herbicide in Puerto Rico in 1956.

All this appears to back Eum’s claims that the defoliant, known to cause cancer, fetal deformities and mental illnesses, was sprayed in the middle of the 1950s in Korea.

While he was working as staff sergeant at a base in Yeoncheon, Gyeonggi Province in 1967, he had another chance to see the defoliant, possibly the same one he saw back in 1955.

Under the supervision of a U.S. military officer, Eum sprayed the defoliant with his “bare hands” on areas which North Koreans could use as their infiltration routes. Eum has received government compensation since he was registered as a defoliant victim in 2007.

“It was the same as what I witnessed (at the unit in Cheolwon in 1955). All weeds turned red and withered as they died,” he said. “Had I known that the defoliant was such a dangerous chemical, I wouldn’t have sprayed it with my bare hands.”

During the session, it has formed a 13-member joint team to investigate the possible contamination at the now-defunct Camp Mercer in Bucheon, Gyeonggi Province. One former U.S. soldier alleged “every imaginable chemical” was buried there.

The team will begin the basic onsite inspection at the camp on Tuesday with the U.S. military providing its environmental records and other documents related to the design of the facilities on the site, officials said. It is expected to find out whether the camp is contaminated or not in the middle of June, they said.

The taskforce is to probe the possible contamination at 85 sites that the U.S. returned to the South Korean government between 1990 and 2003 without any environmental surveys as the environmental rules, established in the Status of Forces Agreement in 2001, took effect in May 2003.