Samsung Electronics, the world’s No. 1 television maker, held a ground-breaking ceremony for a next-generation liquid crystal display plant in China in a drive to target the fast-growing Chinese market. 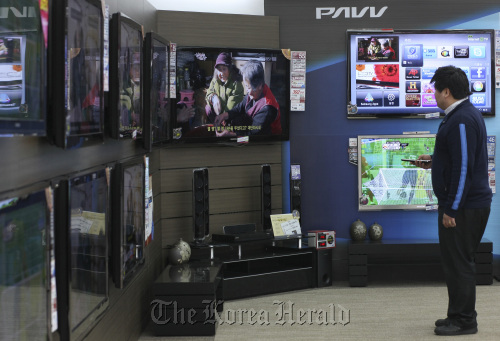 A sales clerk inspects liquid-crystal display televisions at Samsung Electronics Co.’s store in Seoul. (Bloomberg)
The company said it plans to invest $3 billion to construct a 7.5-generation liquid crystal display plant in Suzhou, Jiang Province, and make it ready for mass production by 2013.

The plant, dubbed Samsung Suzhou LCD, SSL, will be built on 571,900 square meters of land and is expected to produce up to 100,000 panels per month beginning in 2013, according to company officials.

The 7.5-generation display panels upgrade business productivity for firms buying the product compared to the previous generation panels because they enable greater panel production, they said.

Samsung Suzhou LCD, SSL is the first foreign-invested LCD firm and was established in China on April 21. The plant is jointly invested in by Samsung, TCL and the Suzhou Industrial Park.

“The plant, which is now kicking off, is a good example of strategic partnership shown between TV industry leader TCL, LCD industrial leader Samsung and Suzhou Industrial Park, the core center of Chinese IT development,” said Chang Won-kie, chief of Samsung’s LCD business. “We will strive to move on further through the success of the new fab.”

Samsung Electronics will dispatch the needed workforce to Suzhou soon after the kick-off ceremony to begin the plant construction, which includes bringing in facilities and parts required to put together the plant.

The plan comes as the Chinese display market is projected to soon become the world’s largest.

Samsung’s rival LG Display is also laying out the details of its plan to construct an eight-generation LCD plant in Guangzhou, China. It has been granted the Chinese government’s approval, but, no date has been yet set on when to hold the ground-breaking ceremony, said an LG Display official.

In a related move, Taiwanese flat-panel makers such as AU Optronics (AUO) and Chimei Innolux (CMI) are making moves to build next-generation panel plants on the Chinese mainland.

AUO has reportedly acquired a stake in Chinese panel maker Kushan Long Fei Opto-Electronic Co. and the two companies plan to build a new 8.5 generation-LCD plant. CMI, on the other hand, has not been given the green light to go ahead with the construction project, said reports.