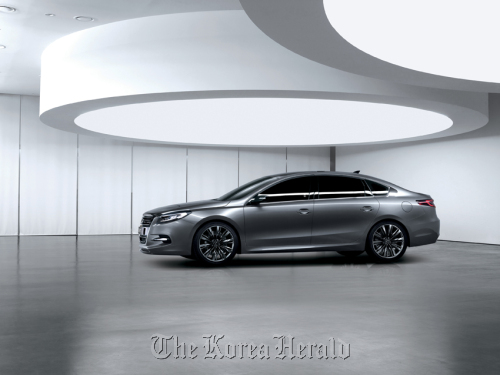 The new SM7. (Renault Samsung Motors Co.)
With just under 2,500 units of the current SM7 sold on the local market during the first four months of the year, Renault Samsung has the smallest share of the upper midsized market among the four Korea-based carmakers competing in the segment.

Hyundai Motor Co.’s Grandeur was the most popular upper midsized car for the period, followed by Kia Motors Corp.’s K7. The third place was taken by GM Korea Co.’s Alpheon with 4,740 units.

In addition to the upper midsized market, the new SM7 will give Renault Samsung a much-needed boost to regain the third spot in the overall market.

As it did with the SM3 compact car in 2009, the company will maintain the name SM7 for the upcoming upper midsized sedan.

Much as the new SM3 had little in common with its predecessor other than the name, the new SM7 promises to be an entirely new vehicle.

The new SM7 will be based on the show car unveiled at the Seoul Motor Show in April. The SM7 has been Renault Samsung’s largest model since its launch in 2004. While the company launched a partially changed model ― SM7 New Art ― in 2008, this will be the first full model change for the SM7.

As such, the company has given the vehicle a completely new look. The SM7’s design has been radically changed. The vehicle has been given a long front, and a short trunk creating a look distinct from the competition.

While the carmaker has yet to release details about the vehicle, a new engine appears likely for the new SM7.