For singer-songwriter aspirants in Korea, his upcoming show should be a must-see.

Ben Folds, an American rock pianist and singer-songwriter who has influenced musicians including John Mayer, Josh Groban and Rufus Wainwright, is coming to town next week to hold his first-ever concert in Korea.

“Inspiration first, the spark. Then music comes at random times, while walking or sleeping usually, sometimes in the shower. I have to live with that music and see if it’s real,” Folds told The Korea Herald in an email interview.

“It’s a bit like interpretive dance I suppose. The music interprets how I’m feeling and then I have to describe it in English. Often funny lines best compliment a serious melody and vice versa,” he said. 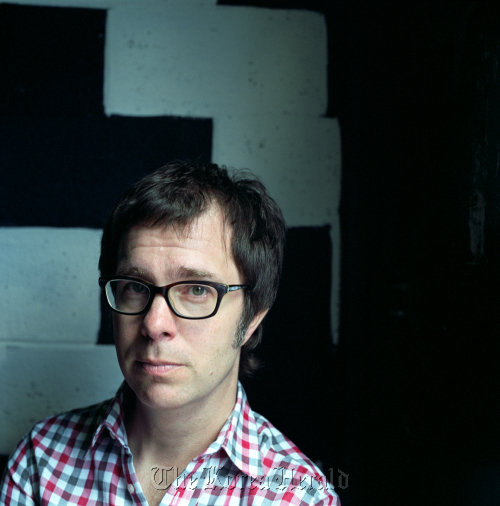 Pianist and singer-songwriter Ben Folds. (Private Curve)
Fold is inspired by “millions of things,” even “someone in the news who’s having a great challenge and is navigating it with some grace.”

He picked Muhammad Ali and the late American comedian Andy Kaufman as people who inspired him the most in his musical career.

Born in 1966 in North Carolina, Folds said he became interested in playing the piano when he saw pianists performing in his childhood.

“I was always captivated by seeing piano players, especially kids who were a little older (than me). It was inspiring to think that I could do that one day if I worked hard enough,” Folds said.

In his high school days, he accumulated diverse musical experience by forming several school bands and playing everything from piano to bass to drums.

In 1994, Folds formed rock band Ben Folds Five, which made him a star among American college students with the 1995 debut “Ben Folds Five” and 1997 second album “Whatever and Ever Amen.”

With his music quickly spreading to Europe and other parts of the world in the late 1990s, Folds was well-received by fans of pop rock.

After the group disbanded in 2000, Folds started his solo musical career with the 2001 album “Rockin’ the Suburbs” and has been involved in collaborations with famous musicians and in film soundtracks.

In 2010, Folds released “Lonely Avenue,” for which he worked together with British writer Nick Hornby who is best known for the novels, “High Fidelity” and “About a Boy.”

The musician said his one-day Seoul show would stage a wide spectrum of his career, mixing recent songs with older hits from the Ben Folds Five.

“I’ll want to make sure that the setlist is very thorough and represents all eras of my career,” he said, adding that the Seoul concert came about because of so many Korean fans contacting him on Twitter.

“It’s a great way to know where you’re needed!” he said.

Folds picked one Korean pop singer that he was aware of ― female vocalist Younha, who appeared live on TV singing the Ben Folds Five’s “One Angry Dwarf And 200 Solemn Faces” a couple of years ago.

“There was an artist named Younha that we saw on the Internet. She did a great live version of one of my old songs,” he said.