As with other literary traditions, Czech fiction’s accessibility to Korean readers has long suffered from a lack of translation into Korean. Even with towering literary figures such as Franz Kafka among the country’s authors, it was only this March that the first anthology Czech short stories in Korean translation, “Prague: City Loved by Writers,” was released.

Czech novelist and poet Michal Ajvaz was among those whose work was included in that collection.

“I spoke mainly about Czech literature in the 19th century, about national support, national revival. It was really very interesting for me to see that environment which was very strange to me … and also the people which I met there were very kind,” the Jaroslav Seifert Prize-winner told The Korea Herald during his first visit to Korea earlier this month. He was in Korea as a guest speaker at Ji-yong Literary Festival in Okcheon, North Chungcheon Province and Hankuk University of Foreign Studies. 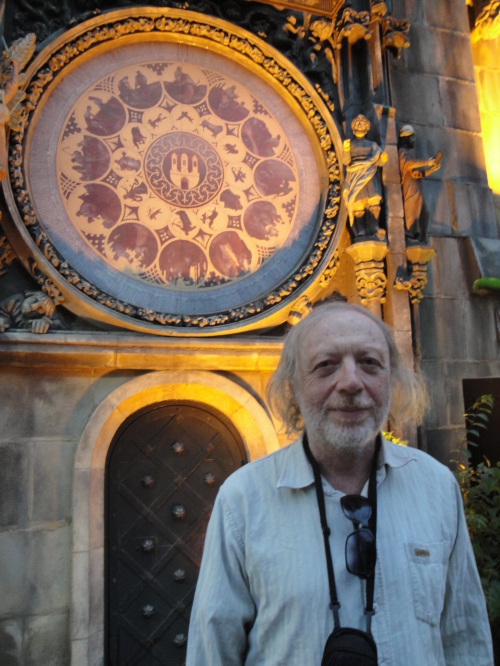 Michal Ajvaz outside Castle Praha Czech pub, restaurant and cultural center in Hongdae in Seoul earlier this month. (Jaroslav Olsa, jr)
Ajvaz rejects the label “magical realism” frequently applied to his work, seeing Kafka and Jorge Luis Borges as greater influences on his writing than Gabriel Garcia Marquez, an exponent of the style. Like Kafka and Borges, Ajvaz includes elements of the surreal in novels such as “The Golden Age,” which reached No. 1 on Amazon Best Books of 2010, and “The Other City.”

Rather than following any specific meaning or idea, much of Ajvaz’s work takes inspiration from a feeling or location. In the case of “The Other City,” the Czech capital Prague was the inspirational spark.

“I was in one little place in Prague and it was covered with snow. I had such a strange feeling and I said to (myself) that I can write of that feeling, and form that feeling. That was how that book was born.”

While places in his country have influenced his work, Ajvaz doesn’t believe his nationality or the Czech literary canon has played so great a part.

But does that then mean he doesn’t feel any responsibility to promote his country or show it in its best light? Is nationalism, which Seoul National University professor Kim Seong-kon recently complained of as dominating Korean writers’ work, to be avoided?

“I think literature which wants to be in service of something, that cannot be good literature. I think that literature must be free. And then when it is free it also may do some service for the country or so, but not primarily,” he said, noting that Czech literature went through a similar nationalistic phase in the 19th century.

While Ajvaz has yet to be acquainted with Korean fiction, he has read some Korean poetry, including work by early 20th century poet Jeong Ji-yong, after whom the Okcheon festival is named, and highly-acclaimed contemporary Ko Un.

“I like Chinese poetry and, for instance, Chinese philosophy and Taoism and I think that the Korean poetry is in some (sense) similar to that. I like the feeling toward nature and unity of man and nature,” he said.

Having had his work translated into eight languages, with translations into four more forthcoming, Ajvaz is keen to the fact that literature can take on different meanings in different countries.

Ajvaz is not only an author and poet but a philosopher also, having published six books on the subject. But while Ajvaz concedes that his work inevitably contains fragments of his opinions and ideas, he is adamant about keeping a clear line between his fiction and philosophy.

“I don’t want to mix it because I am afraid that when somebody writes a novel with many philosophical ideas it is more philosophy than literature. French poet Paul Valery said that, from good ideas emerged bad poems. So I think that something similar is also for novels. More important is story.”

And while he is more open to some interpretations than others, just what meaning if any his writing has is often a mystery to even Ajvaz himself.