Former state auditor Eun Jin-soo appeared before the prosecution Sunday to face questioning over his alleged involvement in a snowballing savings bank scandal.

Eun, a confidant of President Lee Myung-bak’s, is suspected of taking kickbacks including diamonds in return for lax auditing into the corruption-ridden Busan Mutual Savings Bank.

“I’m sorry to have caused public concern. I’ll sincerely answer to questions to reveal truth under legal procedures,” he said upon arrival at the Supreme Prosecutors’ Office in southern Seoul. 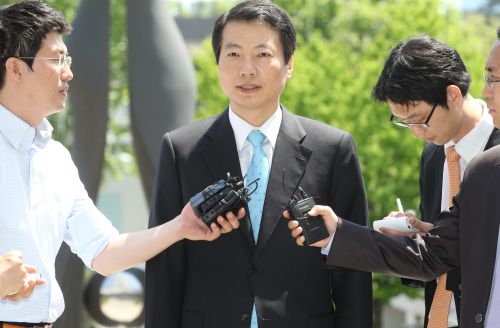 Eun Jin-soo
“There are many news reports that are somewhat different from facts. The truth will come out through objective evidence.”

Eun, 49, stepped down as vice-ministerial commissioner of the Board of Audit and Inspection on Thursday after the prosecution sent him a subpoena.

On the following day, the prosecution said they obtained testimony from Yoon Yeo-seong, an arrested lobby broker for the savings bank, that he “had given hundreds of million won worth of jewelry and money to Eun.”

Despite the BAI law that bans state auditors from inspecting entities related to them, Eun took part in an audit on the savings bank last year.

Prosecutors are looking into whether Eun leaked the BAI’s audit information on the Busan bank and delayed the announcement of the audit results until early this year.

His older brother is also under suspicion of accepting bribes worth 100 million won from Yoon.

The prosecution has been widening the savings bank investigation after executives and major shareholders at the Busan bank and its subsidiaries were found to have taken out illegal loans to lobby politicians and senior government officials and engaged in other financial irregularities totaling about 7 trillion won. Several savings banks, including Busan Mutual Savings Bank, were suspended for capital shortages in February.

Eun was among the attorneys representing then leading presidential candidate Lee in 2007 when he was implicated in a stock price-rigging scandal dubbed “the BBK case.” He later joined Lee’s presidential transition team as a legal adviser. Prior to that, in 2004, he served as a spokesperson of then-opposition GNP.

With Eun involvement, what started as financial corruption case is turning into a political scandal that could implicate some key members of the incumbent or former administrations.

Hwang, who is serving as acting party chief, hinted at the possibility of launching a parliamentary probe into the scandal. His remarks also showed how seriously he views the scandal that comes at a time when the party is trying to win back public support after last month’s humiliating by-election defeat.

“Once the ongoing probe is completed, I think a parliamentary probe should be conducted if necessary,” Hwang said at a meeting of key party officials.

“The public concern has been elevated by the shocking news that a sitting member of the Board of Audit and Inspection was involved.”