Paraxylene and benzene are aromatic hydrocarbons generated by catalytically reforming naphtha, a petrol derivative. The two substances are key for production of polyester and other petrochemicals.

The No. 2 Aromatic Complex in Ulsan, about 414 kilometers southeast of Seoul, will more than double S-Oil’s annual petrochemical production capacity to 1.6 million tons for paraxylene and 300,000 tons for benzene. The two-year expansion project cost the refiner 1.3 trillion won ($1.2 billion), which completed in March.

“The plant is our new growth engine and future driving force that will help us diversify our business areas and establish a solid presence in the areas,” S-Oil chief executive Ahmed A. Subey said in a statement. 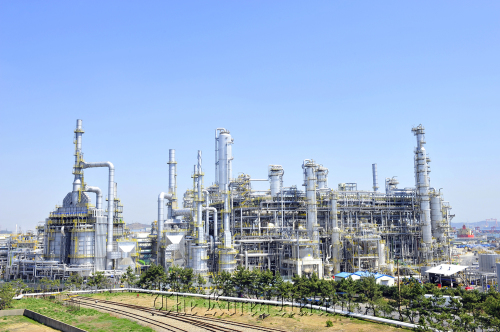 S-Oil’s No. 2 Aromatic Complex in Ulsan. (S-Oil Corp.)
“We’ll be able to gain a firm foothold in the petrochemical market as well as in the oil refining and lubricant oil markets where we’ve already secured global competitiveness.”

Exporting around 60 percent of total output, S-Oil has been boosting its petrochemical business as a new revenue source over the last few years.

S-Oil expects the new facilities to jack up exports by about $3.2 billion and sales by about 3.5 trillion won each year, respectively.

“With the start of operation of the No. 2 Aromatic Complex, we’ll not only become the most influential paraxylene supplier in the Asia-Pacific region, but we’ll also emerge as a petrochemical market leader by taking advantage of our geographical proximity to the center of global demand growth,” an S-Oil official said.