“Obviously, it will depend on the success of the second one,” says Bradley Cooper, whose participation in the inaugural “Hangover” had more than a little to do with his rocket launch to stardom.

“You never know,” Cooper adds, trying to sound cautious about the box-office prospects of the much-anticipated follow-up. “But if there’s a sure thing. ...”

The first “Hangover,” released in 2009 and likewise costarring Zach Galifianakis and Ed Helms, went on to earn $469.5 million worldwide. It was, in case you missed it, set in Las Vegas, where a bachelor party headed into a Bermuda triangle of amnesia, anarchy and absurdist raunch. In director Todd Phillips’ “The Hangover: Part II,” the setting is more exotic ― Bangkok. And the straits the trio find themselves in, believe it or not, are even crazier.

The actor, who dropped back in on his hometown recently, promises, however, that when the third “Hangover” comes around, it will break from the now-established formula. Like the first, “Part II” finds its protagonists unable to piece together the evidently tumultuous events of the preceding evening. The fact that Helms’ character, mild-mannered dentist Stu Price, wakes up with a tattoo across half his face is only the beginning of the mystery. 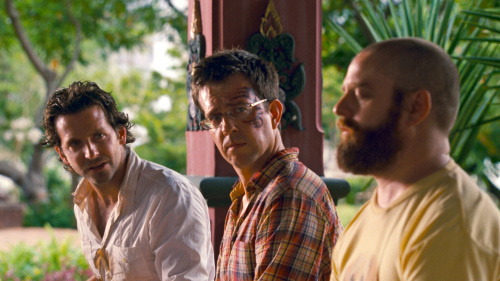 From left, Bradley Cooper, Ed Helms and Zach Galifianakis star in Warner Bros. Pictures’ and Legendary Pictures’ comedy, “The Hangover Part II.” Courtesy Warner Bros. (Pictures/MC)
“I’ll do a third no matter what,” says Cooper. “We’ve all talked about it, Ed, Zach and I, and Todd, and it really is about us coming together and agreeing on a concept. And we’ve all agreed to the tone of the third one, and what it has to be ― which is completely not adhering to the formula of the second.

“That said, I do think that this one had to adhere to the structure, so you can get to know the characters more ― they’re much more fully developed. Now we can depart from that. ... So, for the third one, there will be no missing night. It will be an interesting thing.”

Cooper has already had a good year, box office-wise. “Limitless,” the deft, dark thriller about a slacker scribe who takes a drug that makes him preternaturally smart and successful, was No. 1 its opening weekend, and has now grossed close to $80 million domestically and $60 million overseas. It won terrific reviews, too.

“Limitless’” director, Neil Burger, originally had Shia LaBeouf in mind for the lead, but (happily) that didn’t happen, and Cooper came along instead. About his leading man, Burger said: “Bradley’s worked hard and he’s struggled, and I’m sure in his life he’s had times where he felt like, ‘Well, is this ever going to work out for me?’”

We read that quote back to Cooper.

“Oh absolutely, there were low points,” he responds. “I remember being on ‘Alias,’ a TV show that was sort of my ‘break,’ it gave me a way to make a living as an actor, a real living. ... So, I’m out in Los Angeles, I’m doing this TV show, and then I was relegated to three scenes an episode, and I was just completely depressed. I felt like I was on location in a place I hated, doing a job that I wasn’t able to do, really.”

Cooper was also auditioning for parts in films and not getting them ― “putting my soul into trying to get these roles, and being rejected.” Frustrated, he decided to call it quits.

“That was a real low point,” he recalls. “Then I severed my Achilles tendon and I asked to be written off the show, and I called my business manager and told him to stop representing me.”

Cooper’s retirement didn’t last long, however. He went to see Paul Thomas Anderson’s “Punch Drunk Love” in a theater and couldn’t imagine not being in a business where work like that was getting made.

“I thought, wow, I have to do this. I don’t want to be doing something else ― I’d be sitting watching this movie and wanting to kill myself.

“So, I kept acting and I was lucky enough to get work. But there was still rejection, and disappointment. And there still is. Last week is a great example: There was this movie I really wanted to get, I did everything I could, but when I found out I didn’t get it, it didn’t kill me, I didn’t feel that low. And then when I found out that I got this other movie that I was dying to do for three years, I also didn’t feel that tremendous high.

“So maybe I’m growing up,” he reflects. “But this (business) means everything. I love what I do. It’s part of my life. But it’s a marathon. I understand that more now.”

And then he laughs.

“Of course, it’s very easy to say all that when we’re sitting here talking on the 37th floor of this restaurant and I’m working.”

This is how Cooper’s next year is likely to go, at least as things stand right now: After stops in Toronto, Cannes, New York, Los Angeles, New York again and Berlin, mostly to promote “The Hangover: Part II,” Cooper goes to Montreal to start work on “The Words.”

“That’s my buddy Brian Klugman, who I grew up with. I’ve known him since I was about 10 years old. We went to high school together,” says Cooper. “And he wrote this little movie about a writer. Jeremy Irons is doing it, Dennis Quaid, Amanda Seyfried, Zoe Saldana ... it’s great. I looked at (the screenplay) the other day and I realized I have a huge role.”

“I thought it was much smaller. Oh shoot. You know that feeling you get before an exam? That’s me right now.”

And after “The Words?”

“Five days on a new movie by another buddy of mine, Dax Shepard.” And then “The Place Beyond the Pines,” from “Blue Valentine” director Derek Cianfrance, with “Blue Valentine’s” Ryan Gosling opposite Cooper. And then “Paradise Lost” in October ― yes, the Milton poem about the devil and the fall of man ― and then a reboot of the dark comic-book saga “The Crow,” to be directed by “28 Weeks Later’s” Juan Carlos Fresnadillo.

“Well, you know how it is,” Cooper says with a grin, after running down his schedule. “None of that could happen ― and then you’ll see me walking down the street in a total daze.”