In the round of 16 action at the Asian Football Confederation Champions League, FC Seoul defeated Kashima Antlers of Japan 3-0 at Seoul World Cup Stadium. In Suwon, about 46 kilometers south of Seoul, the Bluewings blanked Nagoya Grampus, also of Japan, 2-0. 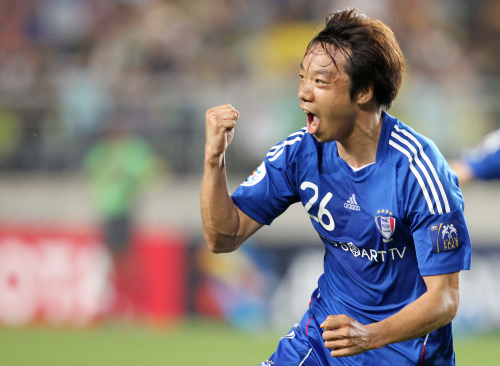 Suwon winger Yeom Ki-hun celebrates his goal. (Yonhap News)
In Seoul, Bang Seung-whan opened the scoring in the 38th, taking a pass from Dejan Damjanovic and driving it past the diving goalkeeper Hitoshi Sogahata. In the 55th, two of Seoul’s top imports connected, as Uzbek Server Djeparov set up Damjanovic from Montenegro.

Moments before the final whistle, Seoul’s Koh Myong-jin capitalized on a miscue by Sogahata to add the finishing touch. The Japanese keeper charged out to midfield to clear a loose ball, but Koh flicked the ball past Sogahata and rolled the ball into the empty net.

In Suwon, wingers Yeom Ki-hun and Lee Sang-ho scored in the 24th and then 57th minute to send the Bluewings to their second straight AFC quarters. Seoul and Suwon have joined another K-League team already in the quarters. On Tuesday, Jeonbuk Hyundai Motors booked their ticket to the next round with a 3-0 win over Tianjin Teda of China.

FC Seoul improved to six wins, one loss and one draw under interim head coach Choi Yong-soo, who replaced Hwangbo Kwan last month. At the 2009 AFC Champions League, FC Seoul also eliminated Kashima from the round of 16.

Suwon extended its home undefeated streak to 26 games ― 22 wins and four draws ― at the AFC event.