[ The Korea Herald – Send E-mail ]
Opera festival to stage two original Korean operas
By 김윤미
Published : May 24, 2011 - 18:26
Updated : May 24, 2011 - 18:26
The Korea Opera Festival’s focus in 2011 is to well present two original Korean operas produced by local opera companies, as the production skills of Korean opera companies have made great progress in recent years, the organizers of the festival said Tuesday.

With five opera companies participating in the event, the Second Korea Opera Festival will kick off on June 23 and run through July 24 at the Seoul Arts Center’s Opera Theater and Towol Theater.

The organizing committee, comprising of 15 members who represent arts organizations such as the Korea National Opera, the Korea Classical Singers Association and the Music Association of Korea, has decided to present two original Korean operas “Nongae” and “When the Buckwheat Blossoms,” and two famous opera works “I Puritani” and “Tosca” and one children’s opera, “Siegfried.” 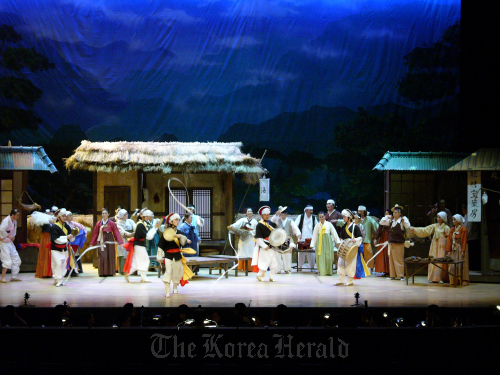 A scene from “When the Buckwheat Blooms” (Korea National Opera)
“In the past, Korean opera companies used to imitate foreign productions but such time is now over. Through several rounds of meetings, the committee concluded that we need to show more of original Korean operas to the public,” said Jo Chang-yeon, chairman of the organizing committee and executive secretary of the Korea Classical Singers Association, at a press conference in Seoul.

“Without original operas, it will be difficult for Korean operas to be globally competitive,” he said.

Opera “Nongae,” produced by Honam Opera Company based in Jeonju in North Jeolla Province, will be held at the Opera Theater at 7:30 p.m. from July 2 to July 15.

Through “Nongae,” the opera company wanted to “correct the public’s misunderstanding about Nongae and produce the most Korean opera by integrating music between Korean traditional music and Western orchestral music,” said Jo Jang-nam, head of the Honam Opera Company.

Nongae was a woman in the Joseon Dynasty who led a Japanese general to a cliff, embraced him and jumped from the cliff to kill them both as a way of protesting the 1592 Japanese invasion.

“Most people have misunderstanding that Nongae was a gisaeng (Korean courtesan). But she wasn’t. She was born in Jangsu in Jeolla Province and was the second wife of Admiral Choi Gyeong-hoe,” he said.

“Nongae” will have four acts, chronologically depicting Nongae from childhood in the first act to the death with the enemy in the last.

The other original piece ,“When the Buckwheat Blooms,” produced by the Gumi Opera Company, will be staged from July 21 to July 24 at the Opera Theater at 7:30 p.m.

The story is based on the late Korean writer Yi Hyo-sok’s novel “When the Buckwheat Blooms” which depicts the lives of Korean peddlers and rural Korean villages in the 1920s.

English-language program books will be available at the original opera performances so that non-Korean audiences will be able to enjoy them.

The opening show of the festival will be held on June 18 on Floating Island, the man-made floating islets on the Han River near the southern end of Banpo Bridge, for free.

The opening show will feature scenes from “The Marriage of Figaro” and “The Barber of Serville.”

“I believe the Floating Island area will be able to accommodate up to 2,000 people. From the Banpo area to the Seoul Arts Center, we named the road ‘Opera Avenue’,” said the organizing committee chairman Jo.

The other operas to be staged include “I Puritani” by the Gloria Opera Company, “Tosca” by the Beseto Opera Company and “Siegfried” for children by the KNO.

“We aim to help the general public easily enjoy operas. From next year, we will make more efforts to hold the festival not only in Seoul but in other parts of Korea,” said Lee So-young, artistic director of the KNO.